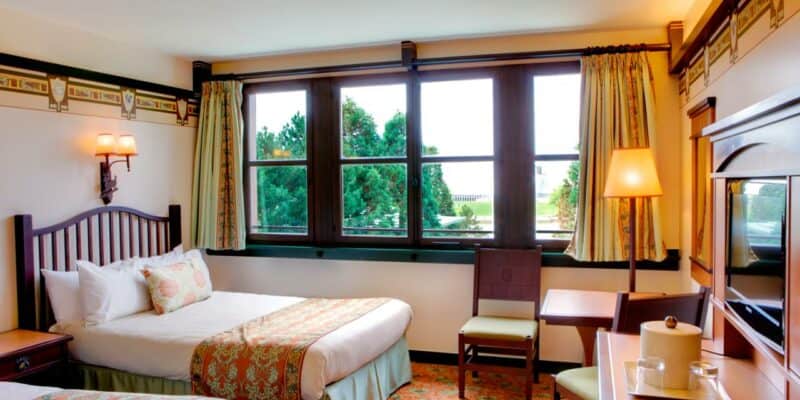 Reopening the Disney Parks has been quite the challenge, as each Park has had to overcome a ton of challenges and difficulties associated with operating safely during the ongoing pandemic. Each Park has had its own set of issues, with COVID-19 cases varying in each country.

Disneyland Paris has had a rough go, closing multiple times but now seems to be on track to returning to a more normal state of operations. Both Disneyland Park and Walt Disney Studios have been undergoing a lot of change as the Park’s prepare for the 30th anniversary, which will kick off next year. Although plenty of updates are being made, there are still parts of the Resort that need to reopen, and today marks another checkmark on that list!

Today we’re at the grand reopening of Disney’s Sequoia Lodge! The hotel inspired by the American National Parks lodges had been closed since March 2020. Welcome back Cast and Guests!

🌲Today we’re at the grand reopening of Disney’s Sequoia Lodge! The hotel inspired by the American National Parks lodges had been closed since March 2020. Welcome back Cast and Guests! 🎉 pic.twitter.com/xt4vGhEOj1

The Resort is now open to Guests; however, some renovations are currently ongoing. As noted by Disney:

To create an ever-more magical experience for our guests, Disney’s Sequoia Lodge facade is undergoing an enhancement project that will continue until Autumn 2022⁽¹⁾. Renovation work will take place during the daytime for an undisturbed night. Some rooms may be impacted, and the swimming pool and fitness centre will be closed from mid-January to Summer 2022⁽¹⁾. All other activities and services at the hotel will not be affected. ​

Provisional dates only, subject to change.

Do you plan to visit Disneyland Paris soon? Let us know in the comments below!