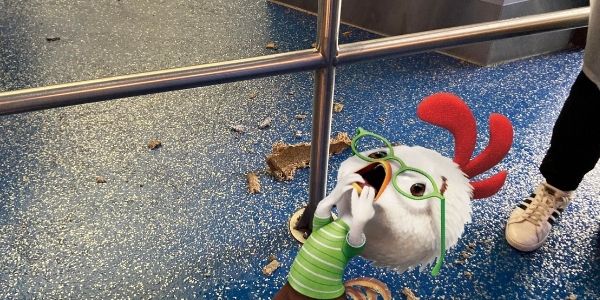 Watch out for falling space junk.

While Walt Disney World has a wide selection of Parks, rides, and attractions, Disneyland Resort will always be some Guests’ favorite. The original, the classic, and the iconic Disneyland Park in Anaheim, California truly has some of that special Disney magic. From its collection of classic attractions like the Matterhorn Bobsleds, Peter Pan’s Flight, and “it’s a small world”, there’s so much to see and do.

A recent post is gaining traction on Reddit after a Guest claims they had to dodge a partial “ceiling collapse” while in the queue for Space Mountain in Disneyland’s Tomorrowland. User u/oceansunfish17 shared a few pictures with the post and joked about whether or not they should have moved out of the way.

Yikes! Did anyone else notice? How did the cast members handle it?

Yep, everyone in line noticed and were joking about how we missed out on a nice check and lifetime passes. We alerted the next cast member we passed

User u/beeredditor piped in with a dig at another infamous Disneyland ride:

Not much of a lawsuit there! If you really want to build a case, just ride the Matterhorn all day. Your back will be shot!

While the debris was probably not dangerous enough to cause any real damage, it is still a little concerning that parts of the ceiling at Space Mountain were in such bad shape for this to happen.

Have you ever seen something like this at a Disney Park or Resort?