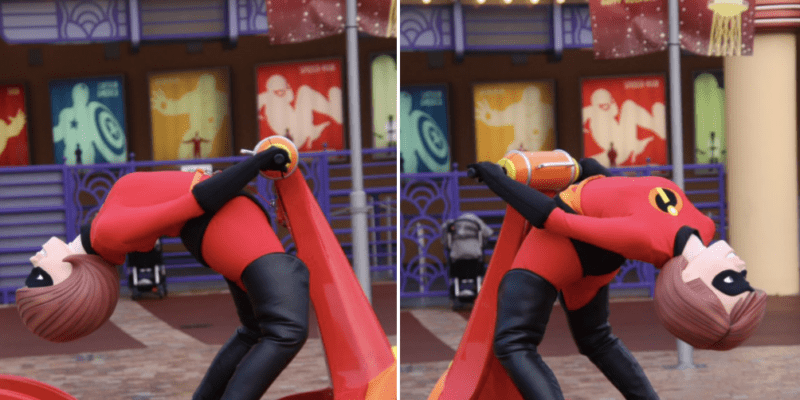 When Guests take a Disney Parks vacation, there is a lot that will amaze them. With each Park having so many food options, as well as fun and detailed rides, shows, as well as stunning Resorts, there is so much to see and do. But one of the best aspects about Disney is the characters.

Disney Parks around the globe are flooded with characters who instill a form of nostalgia in Guests, as well as take them into the movies they grew up watching or have recently discovered. A lot of this means bringing the characters to life. Although meeting characters during a pandemic looks much different than Guests may be used to, there are still ways to do it!

At Disneyland Paris, while The Incredible characters were rolling through Walt Disney Studios, Elastigirl decided to show off some of her skills! DLP Report (@DLPReport) shared a photo of the superhero in what looks to be a backbreaking bend while still operating her vehicle!

They call her Elastigirl for a reason

📍They call her Elastigirl for a reason 😅 pic.twitter.com/gkHHwBja2b

Inside, DLP Castle (@InsideDLPCastle) posted a video of the two, where we can see Elastigirl’s powers come to life in front of our eyes! Here, she is able to pull her leg over her head, as well as back bend while riding the scooter vehicle. In English, the Tweet reads:

Stretching session for The Incredibles at Walt Disney Studios!

What do you think of these awesome stunts?

Comments Off on Disney Character Shocks Guests with Back-Breaking Stunt