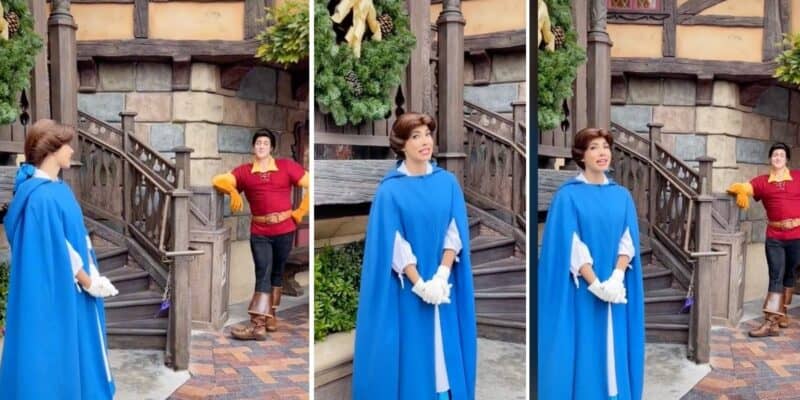 When Guests visit any Disney Park, one of the most exciting things to do is meet the characters!

With the ongoing pandemic and COVID-19 virus still impeding on Disney Park operations, there have been a few changes made to character meet and greets. When the Parks reopened, there were solely character interactions at Walt Disney World and Disneyland. This meant that from afar, Guests could see Mickey Mouse, Minnie Mouse, Aladdin, Jasmin, Peter Pan, Pooh, and more.

Now, Guests are able to enjoy character sightings, which has been deemed at the new character meet and greet. With these, Guests can once again visit characters in a one-by-one formation; however, distancing is still required. That being said, even at a distance, many of these interactions are still incredibly magical.

TikToker Park Hopping Duo (@parkhoppingduo) recently posted a TikTok while meeting Belle and Gaston from Beauty and the Beast at Disneyland Park. In the film, we know that Gaston desperately wants to marry Belle; however, the feeling is not mutual. Now, in Fantasyland, Belle has created her own fantasy for Gaston that keeps the two of them happy!

During a character sighting, one Guest told Belle that they heard a wedding date was picked, and it seems that that statement was true. Below, you can see that Belle says she actually picked the date she will marry Gaston! February 31st is the big day!

If you have not realized just yet, and are extremely confused about his, this makes any sense, February does not have a 31st date! So each year, there will never be a wedding for the two characters! Of course, we can see that Gaston has not realized this at all, and is very excited about his future nuptials with Belle!

Most recently, the Walt Disney World Resort debuted Disney Genie, Disney Genie+, and the new FastPass+ replacement attraction entrances, Lightning Lane, meaning Guests can now skip the standby lines at rides like Star Wars: Rise of the Resistance and Remy’s Ratatouille Adventure for an additional cost. Disneyland has also joined in on Disney Genie as well!

What do you think of this fun interaction? Let us know in the comments below!