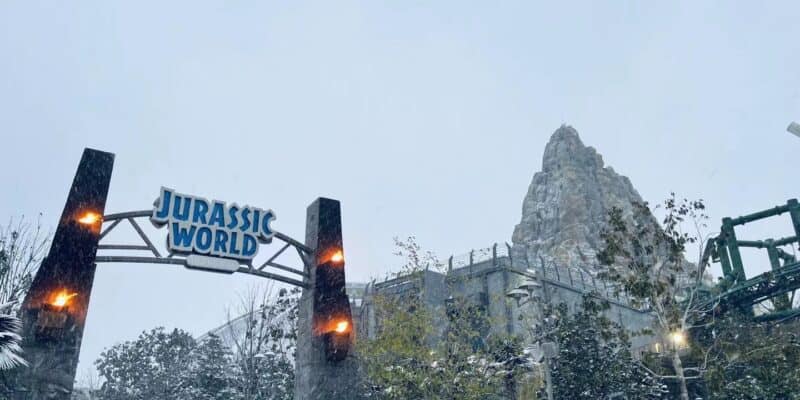 When any Universal fan sees snow in a photo of Jurassic Park, they may need to take a second look. With Universal Orlando Resort and Universal Studios Hollywood being the two main Universal Resorts Guests think of, the idea of a winter wonderland covering the area seems impossible.

I am not a meteorologist, but to have inches of snow in Orlando or L.A. does seem like something that would very likely not happen, and luckily for global warming, it did not! As we recently reported, Universal Beijing Resort, the newest addition to the Universal family, has just experienced its first snowfall and then snowstorm since opening. The Resort had multiple setbacks when it came to opening for fans due to the pandemic pushing back their opening date. However, it is not finally opened!

A couple of days ago, Beijing was under a warning for an extreme snowstorm alert, and it definitely hit. We saw photos of Universal Beijing covered in a sea of white, and in some of the photos, it did look pretty stunning. Unfortunately, this meant that all outdoor attractions had to shut down, but the indoor ones were all still fully operational. Now that more Universal fans have continued to see photos of what Universal looks like with real snow on the floor, they cannot get enough!

Tommy Hawkins (@tommyhawkins) was shocked to see the theme park in the snow, especially Jurassic World!

Poggers Duck (@PoggersDuck) replied to the Tweet with a desire to see the theme park in real life! It seems that Tommy may have thought this was Universal Japan, but nevertheless, he clearly loved the look of snow.

We love to see it

We love to see it

Andy DiGenova (@AndyDiGenova) saw photos and thought it looked “epic.” As you may imagine, Waterworld is not performed in certain conditions once the temperature drops below a certain number.

The reactions to the snowy theme park go on and on, and I have even caught a few who thought it was a photoshopped photo of Orlando, which was fun to see. Today, the weather sits around 49 degrees in Beijing which is reason enough to wear a jacket, but it seems that snow is out of the forecast.

What do you think of these snowy photos of Universal Beijing Resort?