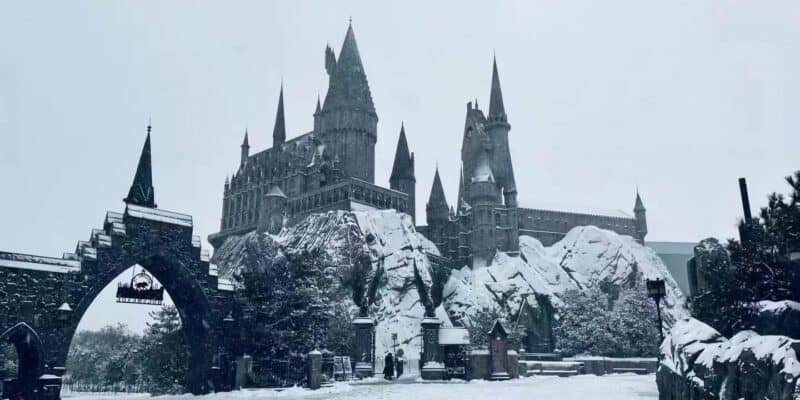 Snow at Universal?!! Could it really be true?

Well, if we are talking about Universal Orlando Resort, all of the snow that you see will likely be fake, especially right now. But, over at Universal Beijing, things are beginning to look a lot like Christmas! It was recently reported that Beijing was under a snowfall alert:

China’s weather agency issued the winter’s first snowstorm orange alert, the second-highest level, on Sunday while nationwide cold wave alarms fuelled concerns over traffic disruptions and flu outbreaks amid rising COVID-19 cases. The National Meteorological Centre forecast blizzards in northeastern China, with some regions getting 45 millimetres (1.8 inches) of snow over 24 hours and heavy snow across the northern part of the country.

Now, we can see that the snowstorm did arrive, and it made its way to the Wizarding World of Harry Potter. Twitter user themeparX (@themeparX) Tweeted photos of the Wizarding World. It seems that this is the first-ever snowfall experienced by the Resort since it opened.

It seems that the outdoor attractions at the Park are currently closed to the public. Roller Coaster Dream (@RCDclub) noted:

First snow falls on Hogwarts Castle at Universal Studios Beijing. The outdoor attractions are currently closed to the public.

First snow falls on Hogwarts Castle at Universal Studios Beijing. The outdoor attractions are currently closed to the public. pic.twitter.com/Mp90gOXMPP

Tomorrow’s forecast seems to have less snow; however, we will have to see how the existing snow affects the outdoor attractions.

What do you think of this snowfall? Would you go to a theme park if it is snowing?

Want to book a Universal vacation? We can help; click here for more information.