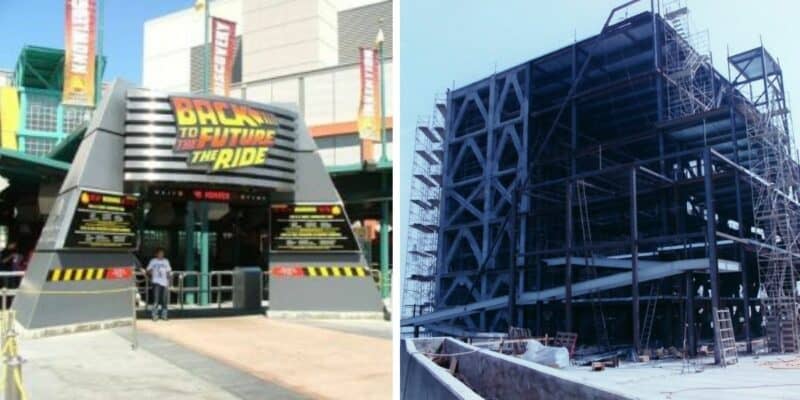 Theme parks are always finding new ways to innovate and create, and when they do this, they tend to need to say goodbye to something else in order to create something new.

When it comes to both the Disney and Universal Parks, we see this happen all of the time. At Disney World, The Great Movie Ride became Mickey and Minnie’s Runaway Railway. Although the original attraction was amazing, it did not boast a large number of Guests, and now, the technology has been dramatically updated. Saying goodbye to classics is difficult, but oftentimes, it means that we as Guests are able to see something amazing take its place.

We recently shared some photos of the JAWS attraction at Universal Studios Florida before removing it for the Wizarding World of Harry Potter. Taking a look at now-extinct attractions can bring back old memories and share what was once there for those who may not have experienced it.

It is also interesting to see the construction of attractions that are no longer represented at the Park. Jim Shull (@JimShull), a retired Disney Imagineer, posted a photo of the construction of the Back to the Future ride at Universal Studios Hollywood. The attraction opened in 1991 and shut down in 2007.

It took over Battle of Galactica, and now has been replaced with a similar style simulator ride, The Simpsons Ride — much like what we saw at the Orlando Park. The attraction was based on Back the the Future (1985), which starred Michael J. Fox (Marty McFly), Christopher Lloyd (Dr. Emmett Brown), Lea Thompson (Lorraine Baines), Crispin Glover (George McFly), Thomas F. Wilson (Biff Tannen), and more!

Image taken during construction of Back to the Future at Universal Studios Hollywood. Note the exit ramps that hang suspended over the hillside edge. As much a thrill as the ride inside the future attraction. #Universalhollywood

Image taken during construction of Back to the Future at Universal Studios Hollywood. Note the exit ramps that hang suspended over the hillside edge. As much a thrill as the ride inside the future attraction. #Universalhollywood pic.twitter.com/2QNEDAEqcS

Because Universal Hollywood is built vertically instead of horizontally due to space constraints, it is not surprising to see attractions replaced so that new ones can be implemented, as there is not enough space to build new ones all of the time. Back to the Future was an interesting project as it was built just on the ledge of the theme park, almost as if it were on the edge of a cliff! As noted above, the building is still in use today, with The Simpsons Ride taking over.

What extinct Universal attraction do you wish you could ride again? Let us know in the comments below!

Let the expert team at Academy Travel help you plan your next magical vacation to Universal Studios Hollywood! Why not stop by Disneyland Resort, including Disneyland Park and Disney California Adventure too? Or head east to Universal Orlando Resort’s Islands of Adventure and Universal Studios Florida. You can also check out Walt Disney World Resort’s four theme parks — Magic Kingdom, EPCOT, Disney’s Animal Kingdom, and Disney’s Hollywood Studios — and the Disney Springs shopping and dining district!