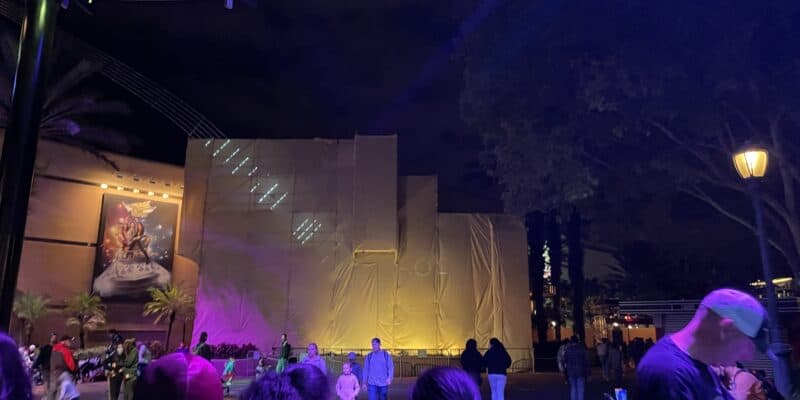 Rock ‘n’ Roller Coaster Starring Aerosmith is one of Disney World’s most intense rollercoasters. Blasting off at 60 miles per hour, the indoor coaster takes you through crazy fast highways, giant donuts, and other fun objects as Aerosmith music blasts away in your super-stretch limo. I mean, backstage passes are always a plus!

In September, we reported that the guitar, which takes up a massive majority of the attraction’s facade, was covered up. Now that we are in November, we wanted to check back to see if any progress has been made. It seems that whatever work is being done is not yet complete, as the tarp is still covering the guitar.

That being said, as we can see in the below photo, the guitar is being illuminated from behind the tarp at night, so hopefully, that means that the work that is currently ongoing is nearing its end!

In a closer look, we can see that the knobs on the guitar are also illuminated.

The fate of Rock ‘n’ Roller Coaster Starring Aerosmith has been one that is questioned by many fans, as the rights for music are nearing an end. Universal Music Group will soon own the catalog. As we can see in the attraction’s gift shop, Aerosmith merchandise is no longer available for purchase, and attraction merchandise just notes Rock ‘n’ Roller Coaster on the graphics. In Disneyland Paris, the ride is being rethemed to become an Iron Man coaster in the new Avengers Campus.

The official description for the coaster reads:

Do you think that it is time for Rock ‘n’ Roller Coaster Starring Aerosmith to go? Let us know in the comments below!