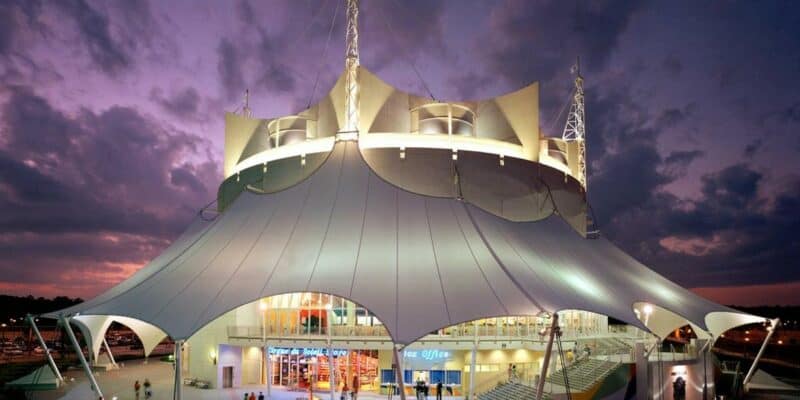 The West Side of Disney Springs at Walt Disney World Resort has remained quiet for years. The massive, iconic white tent theater that was once filled with Guests for Cirque du Soleil’s La Nouba hasn’t held a show since the final performance of La Nouba on December 31, 2017. While we have greatly missed La Nouba which ran for a full 19 years, we’re thrilled to once again enter the white tent after 1,418 days without a performance. November 18, 2021, will be a great day as we welcome “Drawn to Life”, the new Cirque du Solei show, into the Disney Springs white tent!

Disney and Cirque du Soleil have worked together for the first time to create a magical performance for Guests. The tent opens to a sold-out audience for the grand premiere of the new show, Drawn to Life on November 18, 2021. While COVID-19 put a hold on the show’s debut, we believe the entertainment will be worth the wait as Disney introduces new ideas, acts, and experiences we can expect to ‘wow’ the audience with an impressive 62-person cast of performers.

“Drawn to Life”, written and directed by Michel Laprise with Fabrice Becker as Director of Creation, is a live acrobatic journey telling the story of Julie, a determined girl who discovers an unexpected gift left by her Disney Animator father: an unfinished animation. As she dives into the inner world of animation guided by a surprising pencil, Julie embarks on an inspiring quest filled with her childhood Disney memories. Developed in partnership with Michael Jung, Executive Theatrical Development, Walt Disney Imagineering along with Walt Disney Animation Studios, the story is driven by 10 unique acrobatic acts alongside animation from beloved Disney films. In addition, the show features all-new animation created by Disney artists led by Animation Director Eric Goldberg, best known for characters such as the Genie in the Disney Animation classic “Aladdin.”

Here’s a recent sneak peek of select acts to expect with Drawn to Life:

If you’re looking to land some Cirque du Soleil merchandise, Disney Springs West Side now has a store for Drawn to Life. And while the highly anticipated show is already sold out for the first two performances on November 18 and November 19, Drawn to Life is expected to be performed 5 nights a week (Tuesday – Saturday) leaving plenty of dates for visitors and locals to snag a show ticket. For more information on tickets, dates, and pricing, visit cirquedusoleil.com/drawntolife.

Are you excited to see the new show, Drawn to Life, at Disney Springs?

Comments Off on After 1,418 Days, Disney Springs’s Iconic White Tent Will Once Again Welcome Guests