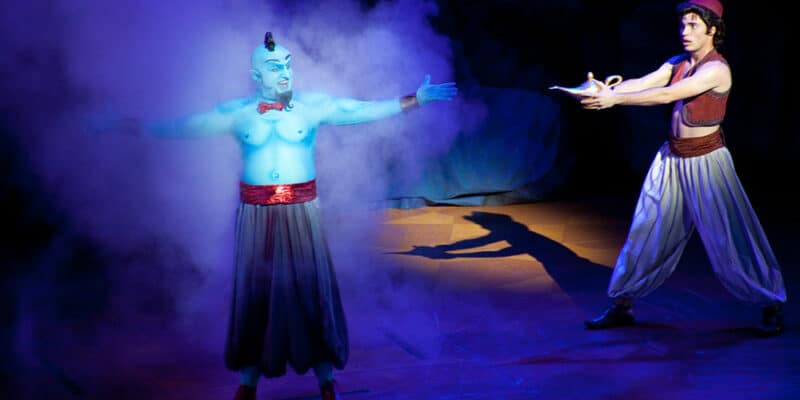 The show must go on! During one showing of Disney’s Aladdin: A Musical Spectacular at Disney California Adventure, the microphones and sound effects malfunctioned, leaving Jafar and Genie awkwardly trying to finish the scene as there was a live audience.

In a TikTok video, posted by former Disney entertainer Dylan White (who played Genie in Aladdin: A Musical Spectacular), he explained that during one of his shows, the sound tech accidentally jumped queues, and therefore, none of the sound effects worked properly. Other actor’s microphones also did not work during this malfunction, leaving only the microphones of Genie and Jafar to work.

The cast continued on with the show despite the malfunctions (as they always say, the show must go on), and during one scene where Jafar wished to be Sultan, sound effects should have occurred to let the audience know Genie, in fact, made the wish come true. Except, when Genie made the proper movements, no sounds occurred and the audience proceeded to awkwardly laugh at the uncomfortable situation.

Genie then broke the awkwardness by jokingly saying “Don’t know why your first wish couldn’t have been for everybody’s mics to work?”, which got the entire audience laughing hysterically.

You can watch the full TikTok video here:

Disney’s Aladdin: A Musical Spectacular was a Broadway-style show based on Disney’s 1992 animated film Aladdin at Disney California Adventure. Disney entertainers burst out into song and dance as they told the story of the animated film, Aladdin.

However, the show closed in 2016 and was replaced by a musical stage show inspired by Disney’s 2013 animated film Frozen.

Were you able to ever watch Disney’s Aladdin: A Musical Spectacular at Disney California Adventure? Let us know in the comments below.