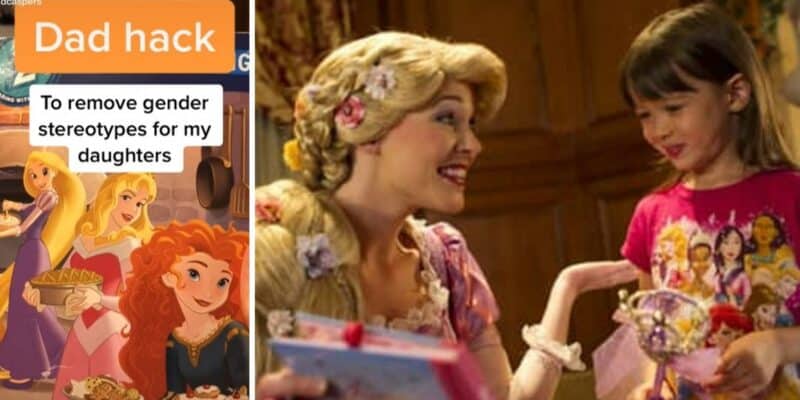 A dad has taken to TikTok to show how he is editing his daughter’s Disney Princess books to remove gender stereotypes. The videos were posted in 2020, but are resurfacing and have gone viral now in 2021. The big question is has this father done a great thing for his daughter or has he taken it too far?

In this video below, @dcaspers takes a Disney Princess book about Tiana who is baking cookies and holding one up for Prince Naveen to eat. @dcaspers says he can change this and uses a printer to edit over the words and images in the book. Instead of cookies, he has Tiana make nachos and adds the words, “Excuse me, Prince Naveen, these nachos are just for me.” The video has 2.9 million views with mixed comments. One comment says “Best. Dad.” while another says “Should I tell him about the studies that came out, showing girls into Disney Princess stereotypes grew up stronger/more independent, or do you guys?” Check out the video below:

In another video, @dcaspers takes a Disney Princess book that features Beauty and the Beast. In this book the Beast is sad so Belle decides to make him brownies from scratch. @dcaspers changes it to “Belle worked all day and picked up something at the store” and included an image of Little Debbie Oatmeal Creme Pies. One comment says “Why is this original book like that in the first place” while another says, “There is nothing wrong with Belle making brownies you’re going too far.” Here’s the video:

But wait, there’s more. In the clip below, Merida is making cookies and asks her three brothers for help. They run off yelling “No.” @dcaspers changes the story to show instead of Merida giving her brothers cookies anyway, she hands them cleaning supplies and says, “If you want one of my cookies, clean up the kitchen first.” One comment to this video is “I LOVE THISSS” while another says “Am I the only one who grew up watching those movies and reading these books and still knew to stand up for myself or is Disney making you a doormat.” This video has 3 million views:

Part 4 shows a Disney Princess book with Rapunzel and Flynn Rider. Rapunzel notices a sign for a pie baking contest and decides to bake a pie. She wins and Flynn congratulates her. @dcaspers decides that instead of a pie baking contest, Rapunzel starts to think about what she’s going to do in the future. Rapunzel wins top of her class and “now he bakes HER a pie.” Here’s the Part 4 video:

The videos keep coming. We have shared Part 1 to Part 4 of the @dcaspers Disney Princess editing videos, but there are actually more. This father works to prove his point with a full 8 Part series of videos.

Has this Dad gone too far or is he successful in trying to remove gender stereotypes? Let us know your thoughts.