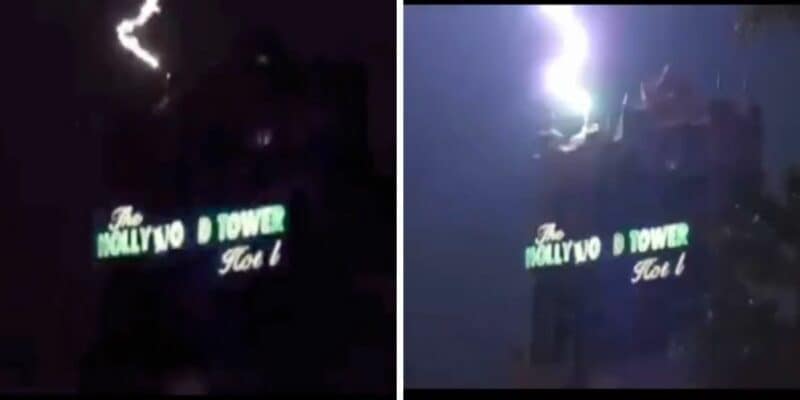 The Tower of Terror at Disney’s Hollywood Studios is a popular ride that gives Guests a thrilling, yet unique, experience. After Guests walk through the lobby, filled with dust and spiderwebs, they step into the pre-show where a television set suddenly comes on and Rod Sterling welcomes Guests on a journey into the Twilight Zone.

Sterling reveals that on “a gloomy Halloween night in 1939, some hotel patrons were riding the elevator when a violent storm struck the building… and they were never seen again. The hotel closed down and has stood empty ever since.”

During one thunderstorm, though we are unsure of the exact date we do know that this happened a while ago, the Tower of Terror was actually hit by lightning, and it was caught on video! Oddly enough, the lightning strike fits well into the theming of Tower of Terror.

The video is now resurfacing and has even been shared by TikTok user @_disney._stuff_, which you can see below:

Again, we are unsure of exactly when this video is from, but now that it is beginning to resurface, we wanted to share it with you all as this is a neat thing to see, especially since it’s the Tower of Terror and the lightning fits well with its theming.

Have you ever seen this video before? Let us know in the comments below.