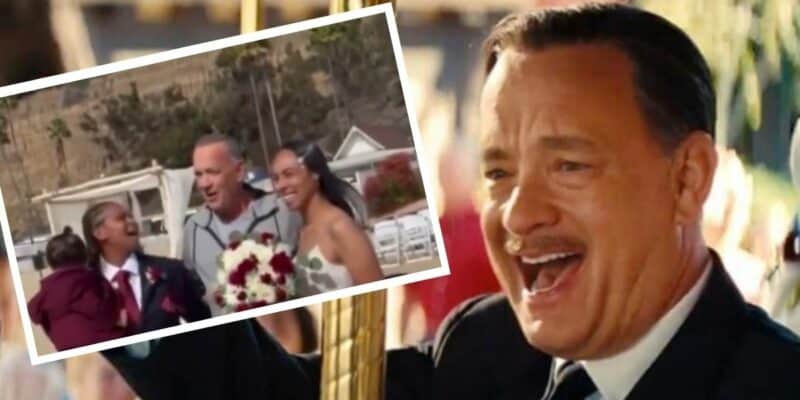 The world might be focusing on Woody’s BFF, Buzz Lightyear, right now but that hasn’t stopped actor Tom Hanks from hitting the news for crashing a stranger’s wedding again during a beach ceremony and photoshoot on Santa Monica Pier.

Tom Hanks is one of the most successful, celebrated, and beloved actors on the planet. Boasting a portfolio of hugely popular movies like Big (1988), Philadelphia (1993), Forrest Gump (1994), Toy Story (1995), and its sequels, Steven Spielberg’s Saving Private Ryan (1998), Cast Away (2000), and more recently starring as Walt Disney himself, in Saving Mr. Banks (2013) opposite Emma Thompson’s Mary Poppins creator, PL Travers. It’s safe to say that Hanks is both a critical and commercial win for the box office and for filmmaking, the movie star is also a director and producer.

As well as his movie endeavors Hanks — who is married to Rita Wilson and father to four children, including Colin and Chet Hanks — has proven himself to be a genuinely nice person, often taking the time to talk with fans and even, as it happens, having a tendency to crash strangers’ weddings.

Last week, Diciembre and Tashia Farries celebrated their wedding on the Santa Monica Pier, and amid all the excitement and rush of a wedding photoshoot, who turned up? None other than Academy Award winner, Tom Hanks.

“We were so in our own moment so for him to walk up, it was shocking and took a second for us to realize. It was the cherry on top for our big day,”

In a video shared by Chisme No Like on Instagram, one of the wedding guests caught the moment the Hollywood actor surprised the newlyweds.

In the video, you can hear other people shouting “That’s Woody! From Toy Story!” while Hanks greets the Farries’ and poses for a picture with the couple. It’s a heartwarming moment and one the newlywed couple is not likely to forget for a long time to come.

“He said he noticed the ceremony and gave us many compliments and just said we looked beautiful, […] He gave us love advice and was just so positive and humble.”

That’s not the first time Hanks has been involved, some way or another, in a wedding. Back in 2018, Hanks was invited to a fan’s wedding ceremony but due to his commitments performing in a play in Los Angeles, he could not attend. He did, however, send a photograph of himself along with a letter asking the couple to join him as his guests at an upcoming performance of his play.

And before that, Hanks crashed a wedding in Central Park and stopped to take photos with the happy couple.

For fans of seeing Tom Hanks on screen, the movie star will next appear in Apple TV+’s Finch (2021), and Baz Luhrmann’s Elvis (2022) as Elvis Presley’s manager, Tom Parker. He is also attached to star as Geppetto in a new live-action adaptation of Pinocchio from Robert Zemeckis, as well as the leading role in A Man Called Ove, based on the bestselling novel of the same name.

For fans of the character Buzz Lightyear, Lightyear (2022), starring Chris Evans (yes, not Tim Allen) has just released a trailer and will debut next year!

What do you think of Tom Hanks crashing weddings? Let us know in the comments down below!