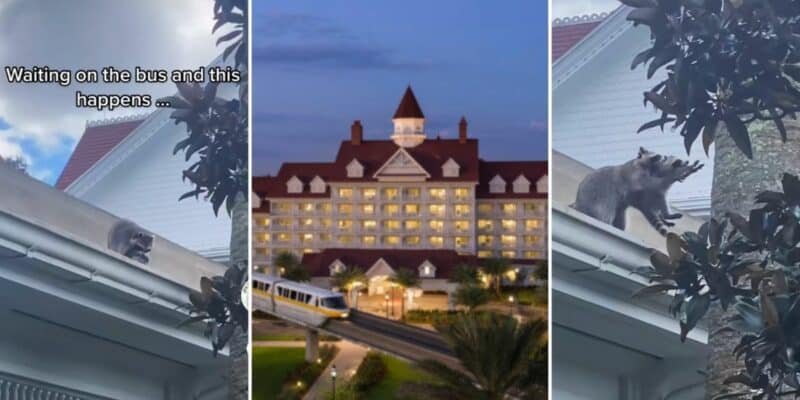 Sometimes though, situations completely out of Disney’s control can happen while Guests are on their Walt Disney World vacation. As it happens, some people staying at Disney’s Grand Floridian Resort & Spa, captured a rather unique moment between two wild raccoons.

Most animal encounters on Disney property are over at Disney’s Animal Kingdom. Home to iconic attractions like Kilimanjaro Safaris and Gorilla Falls Exploration Trail, Animal Kingdom is a wilderness explorer’s dream — even if the Disney gorillas sometimes don’t want to see you. Then there’s EPCOT and The Seas with Nemo & Friends Pavillion where Guests can see sharks, rays, sea turtles, and manatees in a unique educational environment at the Disney theme park.

But what happens when the animals aren’t in the Parks and are out in the wild amongst Guests at the Disney Resorts? That’s what happened to one group recently as they waited for the bus at Disney’s Grand Floridian Resort & Spa.

Sharing to TikTok, Brittany Sims (@brittanysims827), captured the rather shocking yet heart-warming moment a raccoon helped its kit to climb a tree just outside the popular Disney hotel.

The video rather hilariously asks viewers “Grand Floridian or Animal Kingdom?” and shows an adult raccoon helping the younger animal by launching it at a tall palm tree. From the comments of the video, we can ascertain that another kit was at the top of the tree — it seems even wild raccoons have a taste for the premium Grand Floridian experience!

Fans were quick to comment on the video — which has now been viewed over 22,000 times — stating that the raccoon was in keeping with its Disney environment due to the animal’s resemblance to famous Disney characters like Meeko from Pocahontas (1995) and Rocket Raccoon from Guardians of the Galaxy (2014).

Some comments jokingly reference the prime fireworks viewing spot the raccoons must have while others were shocked to see the rather dangerous circumstances the animals were filmed in. The video creator stated:

We were all on edge, she was shaking – bless her heart. Everybody at the bus stop had their eyes glued.

Luckily, as the video shows, the raccoons did safely make it back to their home in the trees of the Grand Floridian.

While it is a rather exciting experience to see wild animals roaming the Orlando theme parks in Florida and the many Disney Resorts within Walt Disney World, Disney does have a strict policy when it comes to local wildlife. Per the General Walt Disney World Property Rules, they state:

Feeding, petting, touching, harassing or harming any wildlife, including birds, is prohibited.

Thanks to cameras and social media, remarkable Disney vacation moments like these can be captured and shared.

Have you ever seen any wildlife while staying at the Walt Disney World Resort? Let us know in the comments!

Comments Off on Rocket or Meeko?! Raccoons Completely Shock Guests at the Grand Floridian