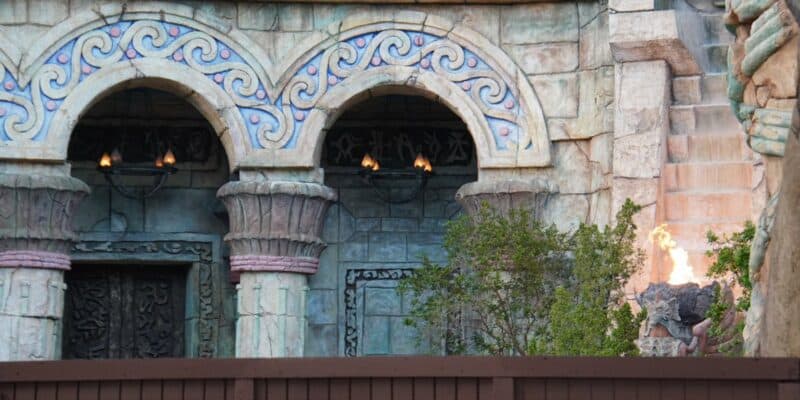 At Universal’s Islands of Adventure, The Lost Continent section of the Park is still lovely to walk through; however, there is not much more than that to do when Guests visit the area. The Eighth Voyage of Sindbad Stunt Show shut down before the pandemic; however, the theater and set for the show still remain and take up ample unused space in the land. On top of that, Poseidon’s Fury has been shut down since prior to the pandemic and is currently under refurbishment.

At the moment, massive construction walls surround the attraction, and Guests cannot see inside the caves or the external facade. We recently posted a refurbishment update after viewing an aerial shot of the attraction where we saw a lot of the water features on the outside of the attraction drained.

Recently, however, we have seen some elements return to the attraction, such as the external flames upon entry and the lights on the attraction’s interior. Bioreconstruct (@biorecontruct) took a photo of the exterior construction walls and was able to see the work going on above it.

Lights on, flame on, at the refurbishment of Poseidon’s Fury.

Lights on, flame on, at the refurbishment of Poseidon's Fury. pic.twitter.com/PMu0Pq4ROx

To see the flames once again lit is likely a test being done. That being said, one could speculate that things such as the fire on the outside of the attraction, which is purely for aesthetics purposes, would be one of the final touches that the refurbishment would deal with as it is a minor aspect of the overall attraction.

Perhaps this means Universal’s Creative team is on the tail end of this refurbishment. That being said, those thoughts are purely speculative at this point, as Universal has not stated when the attraction will be available to Guests once again.

Stay tuned to Inside the Magic as we continue to keep track of this attraction’s future.

What updates do you think Poseidon’s Fury needs? Let us know your thoughts in the comments below.