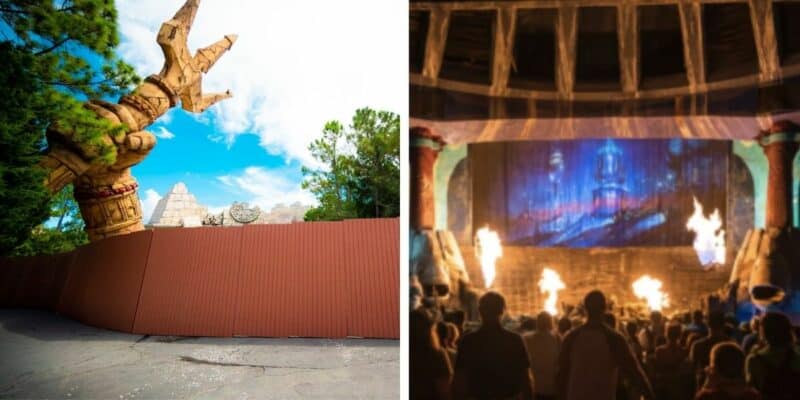 Although Universal Orlando Resort has been moving forwards thro9ught the pandemic, continuing to reopen their theme parks and certain offerings within it, there has been a few attractions and lands that have remained desolate when it comes to things to do.

At Universal’s Islands of Adventure, The Lost Continent section of the Park is still lovely to walk through; however, there is not much more than that to do when Guests visit the area. The Eighth Voyage of Sindbad Stunt Show shut down before the pandemic; however, the theater and set for the show still remain and take up a large unused space in the land.

Poseidon’s Fury also has remained closed throughout the pandemic, leaving many Guests wondering what the fate of the attraction is. Poseidon’s Fury is a walk-through attraction that is highly immersive and slightly theatrical, giving a very different attraction style to the theme park. As we previously reported, Poseidon’s Fury is slated for refurbishment this month, and now we can see that construction is clearly ready to begin.

Walls have appeared around the perimeter of Poseidon’s Fury at Islands of Aventure!

Walls have appeared around the perimeter of Poseidon’s Fury at Islands of Aventure! 🔍 pic.twitter.com/wVAxNwNffP

Having been at the theme park just yesterday, I can confirm that these walls are brand-new as of today. From its look, it seems the exterior of the attraction is getting an overhaul, as the walls completely cover the entire attraction facade.

At the moment, Universal has not announced that the attraction is being replaced, and since it is on the refurbishment schedule, it seems that Poseidon’s Fury does have a bright future ahead of it.

Stay tuned to Inside the Magic as we continue to keep track of this attraction’s future.

Do you think that Poseidon’s Fury needs to stay or go to Islands of Adventure? Let us know your thoughts in the comments below.