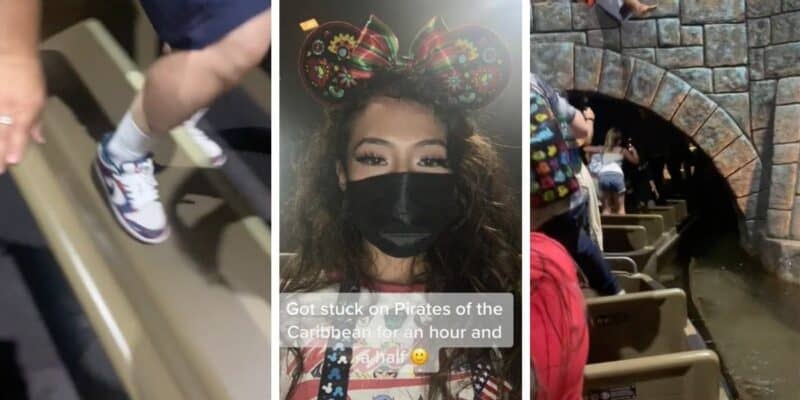 If you are ever on an attraction at Disneyland, you may have waited hours in line to get on, but rarely do you spend hours in the actual attraction itself!

Disneyland Resort has two theme parks, all filled with amazing attractions that at times, may experience a minor hiccup or malfunction. When this happens, Disney temporarily closes the attraction, and more times than not, it is open again for Guests to enjoy within minutes.

However, there are instances in which Guests are aboard an attraction when it breaks down, and Disney Cast Members must safely evacuate them as the ride is unable to move them to the exit. Depending on the ride vehicle, the evacuation could be very simple or complicated when this happens. For example, evacuating Guests from Mickey and Minnie’s Runaway Railway in Walt Disney World is easy as the floor is flat without many obstacles. But if we look at an attraction that deals with water or heights, things can get a little more complex.

Pirates of the Caribbean at Disneyland is an attraction that tends to go down from time to time on both coasts, and we have reported many safely executed evacuations in the past. Now, it looks like another set of Guests were evacuated from the ride, and they had to get a little bit of a workout in while doing so!

Dulce Cruz (@dulce_cruz_) took to TikTok to share the recent evacuation story. After being stuck on the attraction for one hour and a half, Dulce explains that the Guests had to walk over each seat on the boats to get to the boats ahead of them in order to exit the attraction.

It seems that all of the Guests aboard complied with the instructions, and no one has been reported as injured, which is fantastic news. Although this is not an ideal situation for many, it is a cool story that each Guest can take home and remember for the rest of their life!

Please be advised that Guests should always keep their arms and legs in any ride vehicle while at the Disney Parks at all times, unless instructed to otherwise, as Guests were in this case. Also, while evacuating, be sure to not touch any of the animatronics or probs nearby, as Cast Members are focused on ensuring Guest safety, and should not have to worry if some Guests are not doing as they are told. Plus, you wouldn’t want to injure yourself or damage anything on Disney property!

It was not said in the video, but when attraction evacuations such as this occur, Guests are often given a FastPass, or now, a Lightning Lane pass, which will grant them front of the line access to another ride in the Park.

Have you ever been evacuated from a Disneyland attraction? Let us know in the comments below!