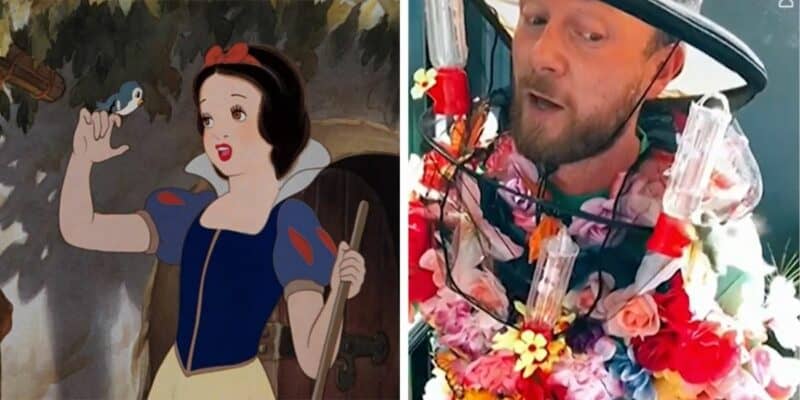 When we think of a Disney princess, we often think of the stunning animated creations or the Disney Parks princesses who look utterly perfect. In most cases, almost every representation of a princess that we have seen to date copies the original animated look.

With an exception, we are starting to see Disney diversify from the princess mould that some characters follow. For example, in the new live-action The Little Mermaid film, Halle Bailey, a Black actress, will be playing Ariel. That being said, when it comes to the Disney Parks, the characters have yet to diverge from what the original animation dictated. But what makes a Disney princess? Sometimes, it may just be the qualities that they uphold or the powers they possess. Now, it seems that one gentleman is bringing major Snow White vibes to his porch!

People (@people) recently Tweeted a video of a man who covered himself in flowers and hummingbird feeders to have the birds come to him. Snow White is the master when it comes to calling over birds and other animals, so it seems that this man found a real-life way to do just that!

This man created a suit covered in flowers and hummingbird feeders!

This man created a suit covered in flowers and hummingbird feeders! 😍 pic.twitter.com/vZn4M54GfH

In the video, we can see that as soon as he walks outside, a hummingbird is already fluttering around him and drinking some of the water connected to his hat. The bird then flies directly in front of his eye line and hangs around for a moment before heading out, almost looking like one of the scenes from Snow White where the princess whistles and is met with birds swirling around her.

We have also recently written about a real-life Ariel in Nashville, Tennessee. At a local aquarium, there is a girl named Sabrina with red hair who dresses like the Disney princess and swims around the tank! To learn more about her and the experience, click here.

What do you think of this real-life Snow White dressed in a floral bird feeder suit?

Comments Off on Man Turns Himself into Bird Feeder, Becomes Real-Life Snow White