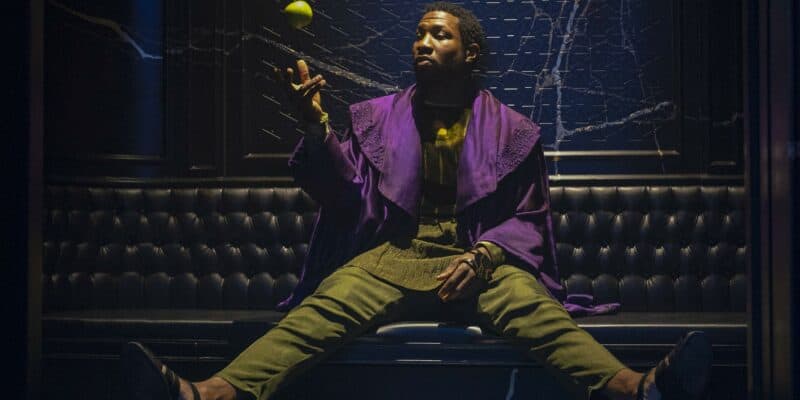 After appearing in Loki, this actor will be appearing in another role as part of the Marvel Cinematic Universe and utilizes his phone lock screen to give him character inspiration daily.

Jonathan Majors, who plays He Who Remains (a variant of Kang the Conquerer) in Loki on Disney+, recently appeared on Jimmy Kimmel Live to answer questions about his life and current projects he is working on.

There was a segment where he spoke about a Tweet posted by a waitress who served him once, calling him out for having a picture of Kang the Conqueror as his lock screen. Majors jokingly responded that “it’s for inspiration!” He then went on to retrace his steps and try to remember where he encountered the waitress.

It is obvious the actor is trying to fully embody himself as the character and commit fully to the role in the upcoming film Ant-Man and the Wasp: Quantumania.

The interview has been posted below.

Kang The Conqueror comes from the Other-Earth. He is known for being a time-traveling despot who is able to use all technology and resources in proximity to him to rule multiple universes where time still remains. Kang is able to age very slowly, similar to a tortoise, and outlive most human life expectancies. He is a master manipulator of time and time travel, and has perfected the art of using technology before anyone else is able to get their hands on groundbreaking items.

According to Marvel, Kang has a wicked weapon arsenal and otherworldly body armor that easily allows him to be the “conqueror” he claims.

Kang’s full-body armor (composed of an unidentified future metal) enables him to lift 5 tons, and can project a gravito-electromagnetic force field around him that is extendable up to 20 feet and can even shield him from a direct nuclear strike. The suit has its own self-contained atmosphere, food supply and waste disposal system. Its weapons include anti-graviton particle projectors in his gauntlets, rendering weightless objects up to 2.2 tons; concussive force blasters equivalent to up to several thousand pounds of TNT; circuitry accessing his ship’s time machine (or other such resources), allowing him an “automatic recall” of a few seconds, as well as enabling him to peer into various timelines; and various other weapons that are regularly updated. Kang formerly used technology that transferred his mind into an alternate body upon the point of death.

Kang also comes equipped with numerous weapons such as: an anti-matter defense screen generator, an electromagnetic field-amplifier, neutrino-ray warhead missile launcher, nerve gas sprayer, electric paralysis generator and a molecular expander. In other words, he is the ultimate warrior and always ready for battle.

Fans can expect to see Jonathan Majors star as Kang on February 17, 2023, when Ant-Man and the Wasp: Quantumania premieres in theaters. According to an interview with Total Film, Majors spoke about how he landed the role of Kang without an audition.

“The Marvel team has their ways. It’s very much like getting a role in drama school. They’re just watching. You don’t audition for roles. You get into drama school, then the dean will watch what you’re doing. If they wanted you, you get tapped. That’s kind of what happened.”

Are you excited to see Jonathan Majors play Kang the Conqueror in the new Marvel Studios production? Be sure to let us know in the comments!