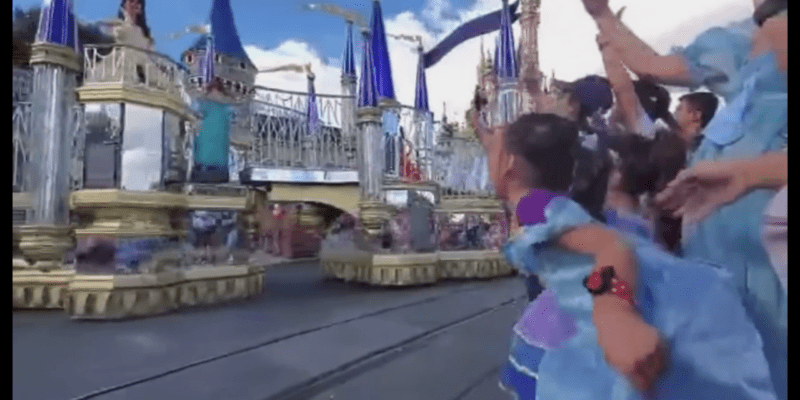 Heartwarming story alert! A young girl visiting the Magic Kingdom with her family may actually be a princess in training as she perfects the perfect princess bow and curtsey.

So many children dream of becoming a Disney Princess. Kids everywhere use their imaginations to pretend like they are living a dream come true in a castle as one of their favorite princesses. The next greatest thing to have happen in this situation, is getting to meet the Disney Princesses themselves at the Disney Parks.

A heartwarming video of a young girl at Magic Kingdom at Walt Disney World Resort recently surfaced on the internet. In the video filmed by the girl’s mother, the young girl and her family are watching one of the daytime parades down Main Street, U.S.A. As the Princesses move past the young girl, she bows and curtseys to them just as they would.

The young girl’s mother told Fox35 news in an interview:

“We are from York, Pennsylvania, but originally from Cagayan de Oro Philippines…We were visiting Disney that day mainly to see all the princesses and Disney characters but also to celebrate our wedding anniversary…My husband was telling her to do courtesies for the princesses because that’s what the princesses do for each other…We were super excited. I was teary-eyed at some point because I saw the princesses bowing back to her and I thought it was adorable.”

As the princesses pass the young girl, some notice her polite gesture and curtseyed back to her, and she becomes even more excited. These small gestures turned into a magical moment that this young girl will never forget.

The young girl’s mother also mentioned that some of her favorite Disney Princesses include Rapunzel from Tangled (2010), Elsa from Frozen (2013), Belle from Beauty and the Beast (1991), and Moana from Moana (2016). She adores these princesses due to their intelligence, strength, and beauty.

The adorable video of this princess in training can be found below from Fox 35, courtesy of Diana Dixon.

Earlier this year, similar to the young girl we are speaking of today, a young prince in training put his manners to the test by tipping his hat in respect to all of the Disney Princesses that passed by him in another cavalcade.

Seeing this interaction between the young girl and the Disney Princesses sure does warm your heart. This experience is a prime example of how special of a place Disney is and how much of an impact just one day on the Park can have on children — or anyone for that matter.

What are your thoughts on this adorable video? Have you ever had a magical Disney Park experience like this one? Let us know in the comments!

Comments Off on Princess in Training: Girl Bows to Princesses in Disney Parade