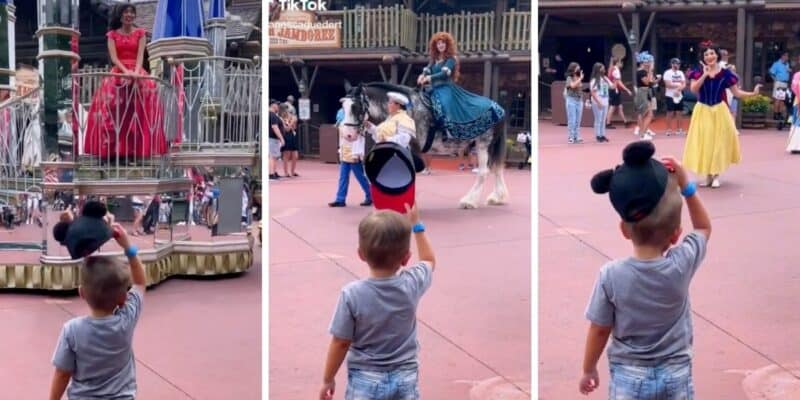 Who is Disney’s true prince? Well, the official Disney Tiktok account seems to think they have found him in a little boy who watched a cavalcade at Walt Disney World Resort. Posted by his mother, a video showing the boy tipping his hat and waving to Disney’s Princesses might be the sweetest thing you’ll see all week.

Set to a lullaby version of Christina Perri’s tune, “A Thousand Years,” the video of a little boy waving and tipping his hat to Disney Princesses has already garnered more than 5 million likes on TikTok, where Disney fan and Walt Disney World Guest Vanessa Guedert posted it on September 12, 2021.

Showing her son in Frontierland at Magic Kingdom, the family was watching a theme park cavalcade roll by in the September afternoon when the little boy started greeting each Disney Princess with his own style. Bernardo, who is about 4 years old, starts out by waving to the Princesses as they pass by, but adds a “hats off” to each one. The Princesses are shocked by his gentlemanly gesture, causing even Snow White’s jaw to drop and stops her in her tracks!

Here is Guedert’s full, original video. Note that the Disney Parks TikTok channel comments, “Oh my goodness! A true Prince! That is adorable!” near the top of the comment feed. They really have given this child the honor of being a real Disney Prince, as the boy tips his hat to Disney Princesses!

Commenters in the feed agree that this video alone is a tearjerker, but with the added music, it will cause any fan to well up! Hopefully, we see Disney’s true prince at other cavalcades and parades, showing us how it’s done!

Do your kids greet the Disney Princesses with their own personal style? Leave us a comment below!