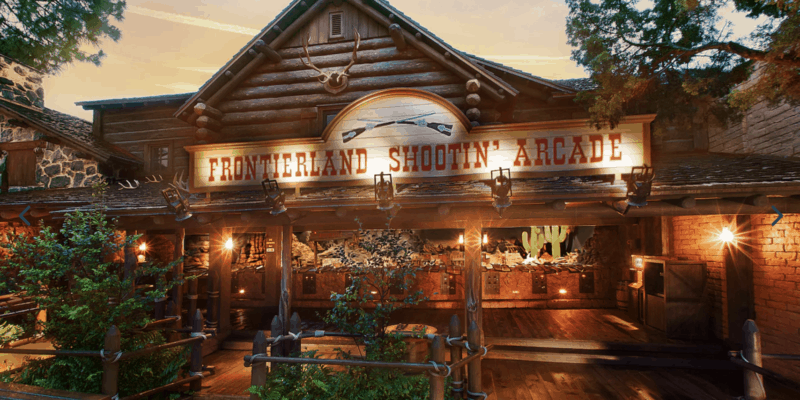 It is always hard to say goodbye to an attraction at Walt Disney World. Whether it is a fun offering such as a photo op or a massive ride that you have so many memories of while riding, Disney World has so many experiences that give Guests something to remember when they return home.

That being said, as Guests, we often have to say goodbye to certain aspects within Magic Kingdom, EPCOT, Disney’s Hollywood Studios, and Disney’s Animal Kingdom as newer concepts and offerings have to be added and need a new place to live. Now, it looks like Frontierland in Magic Kingdom will be saying a final farewell to a popular game that has been around since October 1, 1971.

Frontierland Shootin’ Arcade allows Guests to feel like they are in the wild wild west, with the ability to shoot a fake gun in an incredibly immersive setting. The arcade comes at an extra cost, although recently, we reported that Disney was allowing Guests to play for free! Although we did not know what that was happening, now, we have our suspicions.

If we look at the Frontierland Shootin’ Arcade’s calendar, as of November 27, the offering will close, and there is no return date listed. We took a look at the refurbishment calendar for the same day to see if the game would just be closing for touch-ups, but it is not listed. Since Disney has yet to comment on the status of the offering or noted any replacement, it seems that the fate of Frontierland Shootin’ Arcade is currently in limbo.

Disney describes the game as:

Ready! Aim! Fire!
Mosey on up to a rustic log cabin and fill yer hands with a replica .54-caliber Hawkins buffalo rifle. Against the southwestern landscape, a familiar sight comes into view: legendary Boot Hill in the famous frontier town of Tombstone, Arizona.

Using projectile-free infrared technology, take your best shot at a bevy of moving and stationary targets. The dusty setting provides a picture-perfect backdrop to test your marksmanship.

Safe Shootin’
Rifles at the Frontier Shootin’ Arcade do not fire pellets or projectiles of any kind. Instead, each rifle fires an invisible beam of safe infrared light. When the infrared light from the rifle strikes a sensor on the target, a hit is signaled. So fire away!

Again, we do not know what direction Disney is heading with the game. However, with it not listed as a refurbishment, it seems we may be saying a more permanent goodbye. Stay tuned to Inside the Magic as we continue to learn more information on the Magic Kingdom experience. Personally, I think it would be sad to say goodbye to an opening day attraction during the 50th anniversary, so hopefully, that will not be the fate the arcade meets!

What do you think will come in place of the old shooting game if Disney does choose to replace it?