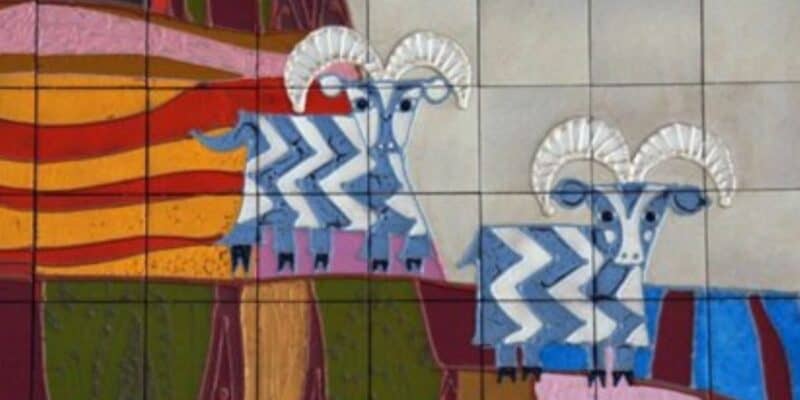 Have you ever heard about the five-legged goat? This inanimate art figure has quite the following for his odd biological makeup, and the reason for his existence is quite interesting, too! Disney’s five-legged goat has been celebrated since 1971, and as part of Disney’s Contemporary Resort family, has been recreated in food, pins, and collectibles. Here’s where you can find this blue furry fellow…

Let’s start at the very beginning of the hotel. Walt Disney World was starting to take shape, and Disney’s Contemporary Hotel had a promise of the future, with a great big industrial style and expansive interiors. In fact, the interior concourse was so big and so “sterile” that Disney knew they needed a bit of contrasting whimsy and large art to make the main tower feel more welcome.

Enter Disney legend Mary Blair. Blair, the well-known artist behind It’s a Small World, Sleeping Beauty, and other Disney essential art was drafted to liven up the Grand Canyon Concourse (so named for the art Blair created). Looking at the great expanse between the walls, Blair created a gargantuan tile mural on the center support, depicting the Grand Canyon and its children and animal inhabitants. The piece uses Blair’s personal sense of color, shape, and line which are traditionally unconventional, but much loved in the Disney community.

One of Blair’s talents with color is her refusal to use “simple” tones. The primary colors are skewed on the color wheel. Red is never just red. It is slightly orange or closer to coral. Secondary colors such as green are avocado, chartreuse, or turquoise—never pure green. Blair’s color sensibility is equally evident in How To Succeed In Business Without Really Trying (1967), where she is credited as Color Consultant. – Design Observer

Head up to the fourth floor of Disney’s Contemporary Resort, and look closely at the bottom of the canyon. You’ll see people visiting, trading, and traveling. As the Mary Blair mural grows to 90 feet in height, the visual changes in color and figures to animals, birds, clouds, and atmosphere. Each time you visit the four sides, you can see something new in the southwestern design.

Blair even added her signature, along with the names of other Imagineers and designers taking part in the mural creation. Her ceramic name can be found atop the others in a tone-on-tone brown color. There are rumors that Disney didn’t want the artists to sign the mural, but as you can see, that is false. Imagineer Blair’s name is proudly shown up top.

Now down to our furry blue friend. There are many goats on the mural, climbing the cliffs of the canyon walls. Dressed in blue and white zig-zag stripes, the goats have similar face structures, wide creamy horns, and black pointed hooves. But as you visit Chef Mickey’s table service restaurant, or ride the monorail through the Resort’s spacious lobby, be sure to look back at the side of the mural.

Up top, among the blue and white goats, you’ll see an odd fellow standing next to his friend. This goat will have five legs. Not featured on the tallest wall of the mural, this five-legged goat is a tribute to the Native American spirit. Believing that nothing man creates can ever be perfect, for we are in fact, only human, Blair added an intentional “mistake” with her five-legged goat.

Becoming somewhat of a local celebrity and fun fact, the five-legged goat has reappeared at Walt Disney World Resort in the form of rice crispy treats, a Disney collectible trading pin, a Vinylmation figure, and plenty of fan-created merchandise.

Have you ever see the five-legged goat? What does he mean to you? Leave us a comment below!

Comments Off on What’s the Famous Five-Legged Goat at Disney?