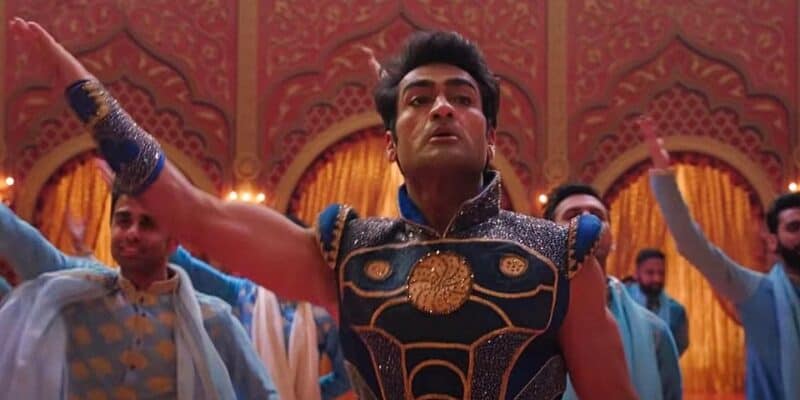 We have been keeping up with all things related to the premiere of Eternals (2021), including the red carpet premiere, stars of the film having to quarantine, concept cars released in support of the film, and even whether a star would like to direct an MCU film in the future. Now, another star of the film — Kumail Nanjiani — has spoken out about recruiting his mother to assist him with curating the perfect outfit for the red carpet premiere.

According to The Hollywood Reporter, Kumail Nanjiani, who plays Kingo in the film, had his mother help him put together an outfit that was not only stylish but paid homage to his Hindu background. They reached out to designer Umar Sayeed to create the traditional gold-and-purple Pakistani sherwani, in collaboration with stylist Jeanne Yang. Nanjiani was born and raised in Pakistan before relocating to the United States for college.

Nanjiani told The Hollywood Reporter (via email) before the premiere:

“I wanted to wear a Sherwani because 1. They look awesome and 2. My costume in the film always reminded me of Sherwanis. And I wanted to use a designer in Pakistan, not just a Pakistani designer in the U.S. So I called my mom, she gave me names of three amazing designers in Pakistan.”

There was back and forth communication via Instagram DMs, sending pictures of the style of design he was trying to aim for, for the red carpet premiere on Monday night at the iconic El Capitan Theatre in Los Angeles, California.

Yang went on to discuss the piece that was created for the premiere:

“They hand-beaded this beautiful paisley pattern in the front, and they did this beautiful pattern on the back with gold thread. They made it to his exact measurements. We only had to do a few minor adjustments. It was wonderful for Kumail to have this gorgeous handmade piece for this special event, his first Marvel film,” she continues, “It’s really nice that he’s able to wear something that is a traditional piece of wardrobe. I love that he has an appreciation for where he comes from.”

Fans will be able to see Nanjiani and the rest of the star-studded cast on November 5, when Eternals premiere as theaters nationwide. Nanjiani is the first Pakistani actor to be a part of the MCU. This film is expected to be another major box office blockbuster for Marvel, which has numerous projects lined up for the upcoming years that are sure to keep fans eager, engaged and excited!

Are you excited to see Nanjiani portray Kingo in Eternals? Be sure to let us know in the comments!