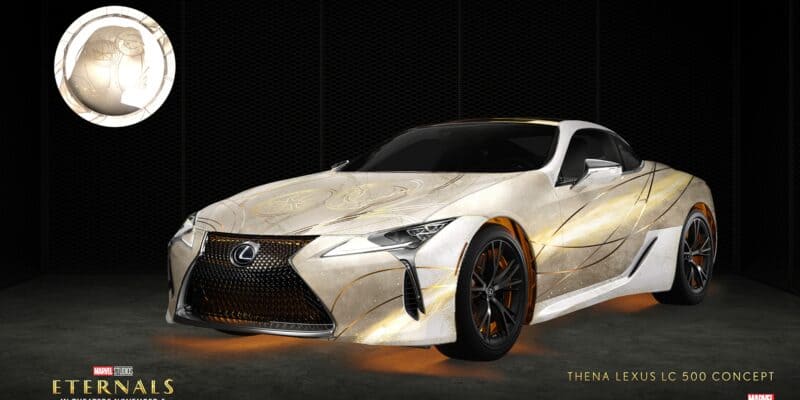 Lexus and Marvel have come together to create the ultimate super-charged, superhero experience that only the car manufacturer and comic phenomena can in honor of the highly anticipated film Eternals (2021).

Lexus and Marvel teamed up to create 10 character-themed concept vehicles, which are all based on the superheroes from the highly anticipated new Marvel film, Eternals, which premieres on November 5.

Each vehicle is tailored and custom to the character in the film it will represent, including specific iconography, armor design, and the superpower of the dedicated hero. One of the main characteristics of the new vehicles will be a golden glow, which will represent the characters’ shared energy that will be able to be seen in the new film.

Vinay Shahani, Lexus vice president of marketing, is excited about the partnership.

“We’re excited to bring the ‘Eternals’ partnership to life through these custom-wrapped Lexus vehicles…Just as each Eternals character has a distinct style and set of capabilities, so does each character-themed Lexus.”

The lineup of Eternals vehicles courtesy of Lexus has been posted below.

Marvel’s Eternals is already on track to break the box office, it has already accumulated millions in pre-ticket sales. With the hype it has built up and with special collabo, the film is sure to be talked about for months to come.

Would you drive one of these cool Eternals-themed cars? Be sure to let us know in the comments!

Comments Off on Lexus Unveils New Lineup of Marvel-Inspired Cars