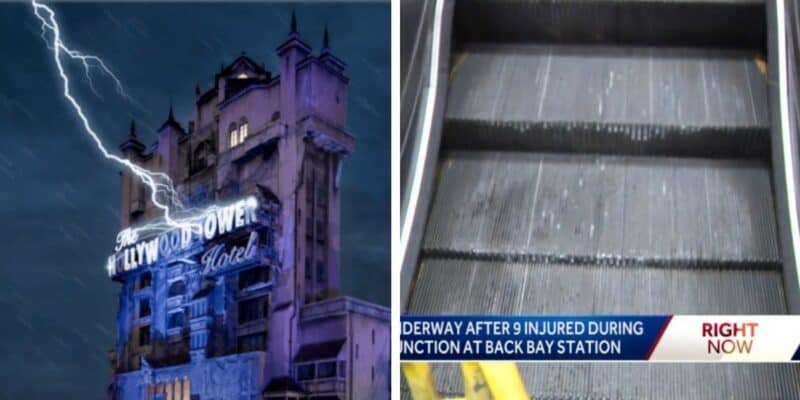 When Guests visit Walt Disney World, they expect to be enamored with world-class thrills and amazing attractions, but they do not expect to get that same feeling while heading towards your hotel, which isn’t even in Disney!

It was recently reported that an escalator malfunction at Back Bay Station that sent nine people to area hospitals. The malfunction occurred on a Boston escalator that runs from “the Amtrak commuter rail platforms to the street-level lobby of the station on the Dartmouth Street side of the station.”

NewsCenter 5 spoke with Sarah Aucoin, a New Orleans resident who was returning to a Boston hotel after attending a Patriots-Saints game. Aucoin was terrified when the escalator gave way and described the situation as the Tower of Terror at Disney World, except this time, you were not in a seat with a seat belt.

“It was like the Tower of Terror in Disney World,” Aucoin said. “I mean, when I say free-fall, it was going so fast and you could just hear the metal on metal grinding against each other. It was absolutely terrifying.

“It just kept grinding on each person that was at the bottom, and everybody was on top of one another. So it was basically like holding everybody to this meat grinder,” she said.

No deaths were reported in the report, and thankfully, however, there were severe injuries caused by the escalator. The escalator was holding around 40 people at the time of the malfunction, which is what caused the massive pile-up on top of the fast speeds the escalator began traveling at. It is horrible to hear of the tragedy that occurred and even more terrifying to imagine what it would be like to experience a free fall like the Tower of Terror attraction when it is unplanned, unexpected, and not in a safe environment.