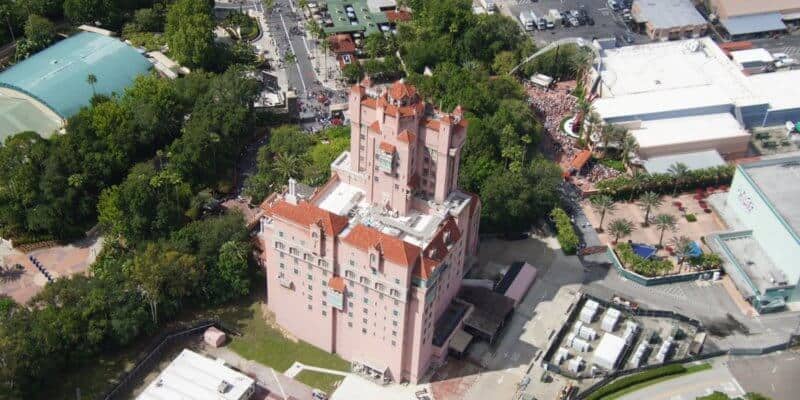 When Guests take a look at The Twilight Zone Tower of Terror attraction at Disney’s Hollywood Studios, it often gives off a feeling that the building is “towering” over you.

From the moment Guests enter Sunset Boulevard, The Hollywood Tower Hotel seems like a massive dark figure that you are pulled toward, framed perfectly with the billboard and aesthetic that Sunset Boulevard has to offer. Guests are convincingly immersed in The Twilight Zone with terror from the queue to the pre-show to the attraction itself.

One photographer, Bioreconstruct (@bioreconstruct), recently posted a photo to Twitter that showcases an aerial shot of the Tower of Terror.

Aerial look at Tower of Terror.

As we can see, the show is taken from the backside of the building, and without Sunset Boulevard framing the attraction or without having a ground view, the tower does not look as terrifying and monstrous as we may think!

Interestingly enough, when looking at the Tower of Terror from a bird’s eye view, the actual 13-story tower aspect of the ride seems quite minuscule compared to the rest of the building. Guests often do not notice that the base of the attraction is actually much smaller, which you can see in the bird’s eye view as it was taken from behind the building.

The smaller base of the building is actually where a majority of the attraction takes place — This is often referred to as the show building. This is actually where Guests wait in the incredibly decorated queue, experience the pre-show, and wait in the boiler room. It also is where the main storytelling aspect of the ride fits in and where we see our Twilight family travel across The Twilight Zone before entering our elevator shaft.

When inside the elevator and actually on the attraction, you may recall the portion of the ride that takes Guests forward and into the main drop tower. The drop tower is what Guests see when walking down Sunset Boulevard, but in reality, the attraction building itself isn’t as tall as many think.

However, by stacking the drop tower on top of the smaller show building, and having it be flesh from the front side, the building and tower seem massive, enticing Guests to come aboard and travel into the Twilight Zone.

Interestingly enough, Expedition Everest at Disney’s Animal Kingdom is even taller than the Tower of Terror, making it the tallest Disney World attraction and building on property!

What do you think of this aerial shot of the Tower of Terror? What other attraction would you like to see from a birds-eye view?