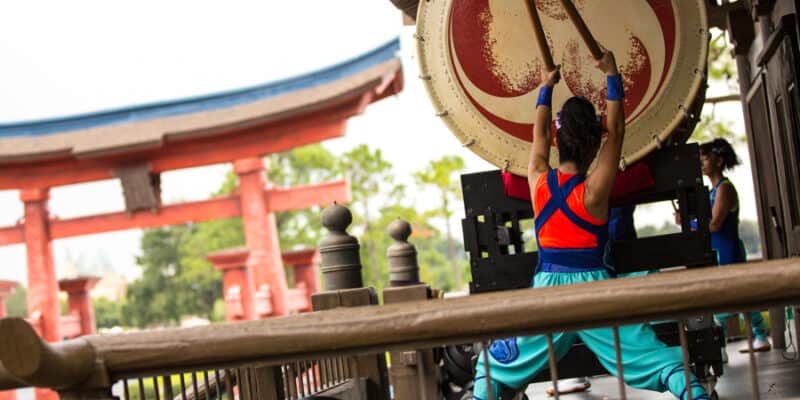 Now that the 50th anniversary celebration has finally begun at the Walt Disney World Resort, Guests can expect to see more and more magic at the theme parks over the next 18 months.

Guests visiting right now will be graced with two new nighttime spectaculars at both Magic Kingdom and EPCOT, as Disney Enchantment and Harmonious have both debuted. Every Park also has hundreds of slight touches, from newly decorated food to banners, as well as the stunning Beacons of Magic which give all four parks a new reason to Marvel at them each night.

Now, Disney is confirming even more magic is headed our way! EPCOT is now about to have even more life infused back into the World Showcase as performers return! In some of the World Showcase pavilions, pre-pandemic Guests were used to being met by performances which helped immerse Guests into the pavilion and culture, as well as entertaining them while they walked around, eating and drinking the offerings in the area.

When the parks reopened, we lost all of those entertainments, and the World Showcase lost some of its magic. Today, we are happy to announce that the magic is no longer missing! Disney Parks Blog stated:

Over at EPCOT, World Showcase travelers are dancing to the Canadian rhythms of Alberta Bound, laughing at the antics of Sergio in Italy, and experiencing the majestic percussion of the Taiko drummers of Matsuriza in Japan.

Live entertainment experiences such as these are among the reasons Walt Disney World Resort truly is The Most Magical Place on Earth. We are incredibly grateful to our cast and guests for the patience you’ve demonstrated as we presented modified forms of some entertainment while continuing to work through the details required to resume others. We’re delighted to be welcoming back so much live entertainment – and so many of our favorite entertainers – this fall and look forward to sharing news about even more additions very soon.

Guests are also able to meet some of their favorite princesses, such as Snow White, Belle, Aurora, Anna, Elsa, and Jasmine at EPCOT. At the moment, these meetings are still distant, but it is great that we as Guests can once again converse with some of our favorite characters and snap some selfies.

Over at Disney’s BoardWalk Resort, we are also seeing entertainment return! There is nothing better than a lively BoardWalk, which is only steps away from EPCOT. Starting October 14, performers will return to the waterfront and give you something to enjoy and marvel at while sipping your morning coffee, or grabbing an after-park drink! We also know that Jellyrolls, the piano bar at the Resort will be opening mid-month, so exciting things are underway at the Resort.

What do you think of all the entertainment returning to Walt Disney World?