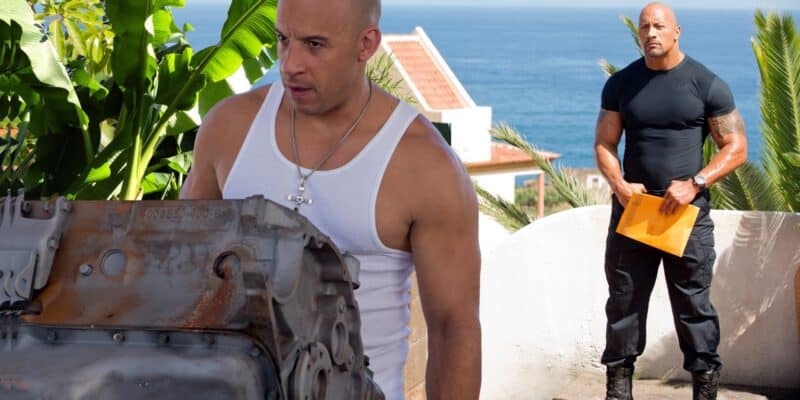 Dwayne Johnson has gone on record to speak about a past feud with Vin Diesel that came to light after an Instagram post that was posted in 2016 after wrapping up on the set of Fate of the Furious. The Moana actor admits that everyone involved in the situation had faults.

Dwayne Johnson has opened up about the tension on set between him and Vin Diesel on the set of Fate of the Furious, and about the Instagram post that opened the can of worms on the situation.

In 2016, The Rock took to Instagram with a (since-deleted) post that praised his female cast mates but questioned if his male coworkers were adequate to be on set, going as far as using profanity to describe them. It did not take fans of the franchise long to figure out that the post was directed toward Vin Diesel. The tension was so bad between the two that Johnson only agreed to do Fate of the Furious if he did not have to act in any scenes with Diesel, citing it was the best thing to do for the whole cast.

He has starred in the franchise since 2011, the first film being Fast Five. He then went on to play Hobbs in the spin-off film Hobbs & Shaw in 2019.

Dwayne has had a stellar career with Disney, Universal, and other studios, and in a recent interview promoting the new live adaptation of Jungle Cruise, Dwayne spoke on what Diesel said regarding the beef between the two actors.

Diesel went on record to say that he showed “tough love” on set to make sure that production was done. Johnson laughed off the reports during the interview, saying that even his co-stars sent him thank you notes for speaking up.

Dwayne also spoke about how the post reflected he was having an off-day and that was not a regular action of him.

“And I came from a completely different culture and environment. And I go into every project giving it my all. And if I feel that there’s some things that need to be squared away and handled and taken care of, then I do it. And it’s just that simple. So when I read that, just like everybody else, I laughed. I laughed hard. We all laughed. And somewhere I’m sure Fellini is laughing too.”

As of right now, there is no official report if the legendary actors have settled their differences. Hopefully, one day, they will be able to create more classics film together.

Would you love to see another Fast & Furious or Disney film starring both Dwayne and Vin? Be sure to let us know in the comments!

Comments Off on Dwayne Johnson Recalls ‘Fate of the Furious’ Beef