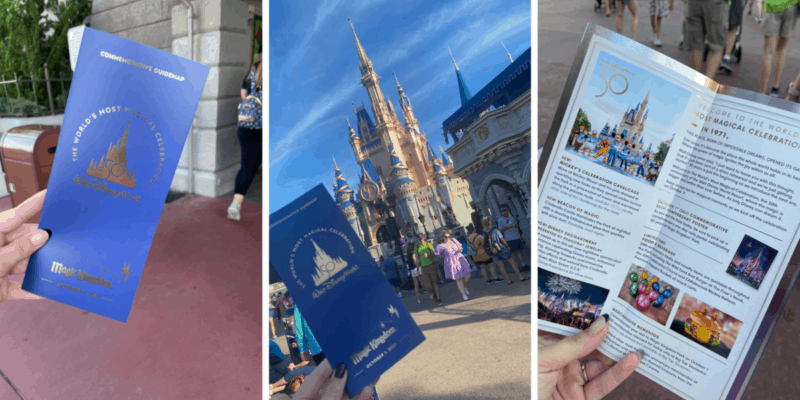 It’s October 1, 2021 and that means Walt Disney World Resort’s 50th anniversary celebration is officially underway! Slated to last for 18 months into 2023, Disney World fans have been preparing for this day for months.

As you can see in the photo above, crowds were thick as Magic Kingdom Park prepared for rope drop this morning — and many of these Guests got a magical surprise in the form of a free commemorative map!

It is important to note that this special blue map [below] is not available at kiosks, but instead is being handed out by Cast Members.

Disney World’s standard park maps have also gotten a special 50th anniversary makeover, however, and now feature a new photo of Cinderella Castle with its stunning decorations [below].

In addition to this fun free souvenir, Disney World’s shops are filled with 50th anniversary merchandise giving all Guests a chance to snag the perfect reminder of this magical celebration!

Recently, Disney Parks Blog encouraged Guests to plan visits to Walt Disney World Resort for The World’s Most Magical Celebration, and even shared a brand new song entitled “The Magic Is Calling” that celebrates all four of Disney World’s four theme parks on this milestone birthday:

You can listen to the song in full below:

Will you be celebrating Disney World’s 50th anniversary in the Parks?