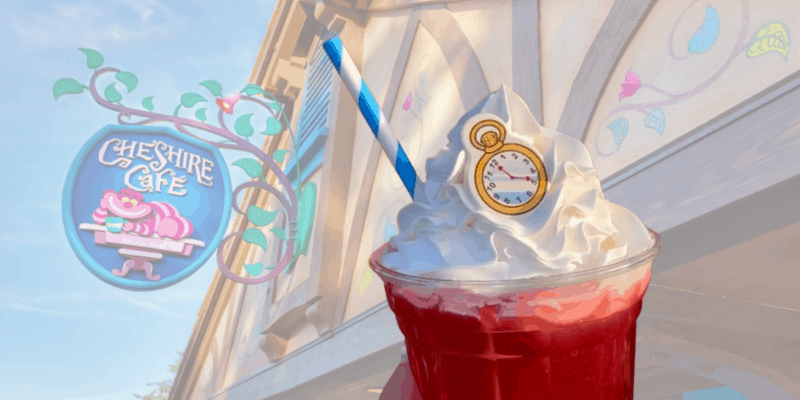 Don’t be late for this Disney theme park treat! The Not Too Late Tea is ready for you to enjoy with wild berry (but not wildflower…) flavor! Fall down the rabbit hole to a new “Most Magical Celebration on Earth” dessert at Walt Disney World Resort!

Even these fall afternoons in Central Florida can be a bit steamy! Cool down after a spin on the Mad Tea Party with a wild berries and cream flavor from Cheshire Café. The fan-favorite walk-up window reopened this summer after being closed for more than a year to once again offer treats like Joffrey’s coffee and Cheshire Cat Tails.

The cool treat we’ve been following through Wonderland is a tea slushy, drinkable yet subtly frozen in wild berries and cream flavor. Topped with a generous helping of whipped cream and a white chocolate medallion of White Rabbit’s pocket watch, the drink also has a blue and white striped paper straw that sets the whole look off nicely.

The Disney Parks TikTok account shared this delectable treat on their feed this week, and the brilliant idea of berries and cream has Disney Parks foodies screaming! Disney Parks narrates the short clip, saying,

“Better check your watch with the Not Too Late Tea at the Cheshire Cafe!
It’s a wildberry tea slush with whipped cream and a chocolate clock.
You don’t want to be late to try this magic kingdom treat.”

Comments from fans following the account include things like, “The 50th food and drinks are *mind blowing emoji*!” and “Sip, Sip Hooray!” Disney Parks chimed in with “The food and beverage team understood the excitement!” If you’re not visiting the parks this week for Walt Disney World’s 50th Anniversary, rest easy. Disney insinuates that this Wonderland tea slush will be available all celebration long, which will last 18 months.

And it needs to be said that over in Magic Kingdom, we’re dying to see the Disney character Cheshire Cat appear! Disneyland Resort recently had Cheshire Cat and Alice playing in the trees with a socially distanced meet and greet that fans meowing! Wouldn’t you love to see Chessy spinning in the teacups with Mad Hatter and Alice at this Disney Park?

Will you be sipping this amazing Not Too Late Tea at Magic Kingdom on your next Disney vacation? Leave us a comment below!