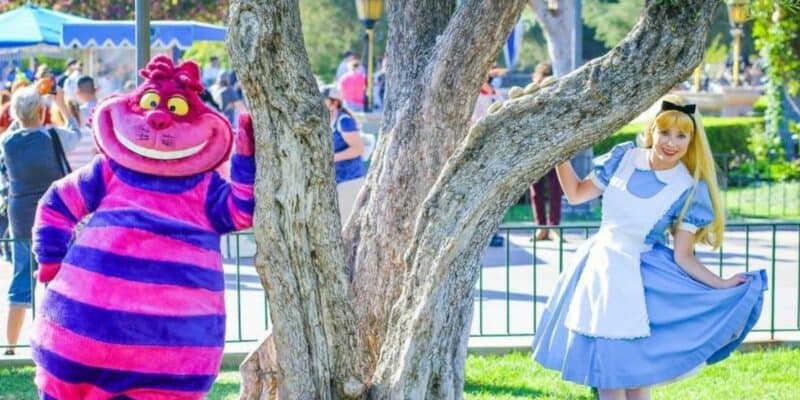 ME-WOW! The new Halloween-time rare Disney character Cheshire Cat meet and greet has fans purring at Disney! Cheshire Cat has been spotted every day with Alice in Wonderland for social distance style meet and greets at Disneyland Park, and we couldn’t be more excited!

Previously only seen at Disneyland Paris for the Halloween season, Chessy leaves the rabbit hole and makes an exciting appearance on the United States mainland in California. From what we can remember, he was only seen in 2019 on the back of a parade float too much fanfare. This specific Disney character meet is so loved that it has been drawing crowds since Cheshire Cat’s Labor Day weekend appearance.

Founder of #DAPSMAGIC, Mr. Daps (IG handle of @mrdaps) shares this photo of the Alice and Cheshire Cat meet and greet from behind a garden fence on a green lawn. Much like the previously held social distance character spotting, the Wonderland characters play around with a tree, posing for photos and waving to Disney Park Guests.

Disney enthusiast Tiffany Mink’s excitement is palpable as she shares her discovery of Cheshire Cat this past weekend. Donning the new Loungefly drop of the Cheshire Cat ribbon shirt, Mink’s caption gives us all the details about the striped cat’s appearance each day since Friday, September 3, 2021:

AHHHHH!!! Y’all. The Cheshire Cat has been my no 1 character meet and greet and he is HERE 😭😭😭😭 Cheshire Cat has been in Disneyland Paris for years, but only during Halloween time. Then in 2019, he randomly was on the *back* of the last float at our Halloween parade during Oogie Boogie’s. I couldn’t believe it, maybe cried a little, and just have known he’s been hiding around Disneyland for so long.

He came out Friday, and has been out every day since. A HALLOWEEN MIRACLE! I hope next year I can give him a hug 🥰

A closeup of our favorite not-so-evil pseudo villain was captured by Mousesteps as they tried to keep cool in the 90-degree heat, hoping that one of our favorite Disney characters was able to do the same. Their Cheshire Cat meet and greet was certainly warm, but we’d brave the sunshine for the first glimpse of Cheshire Cat since his 2019 spotting on an Oogie Boogie parade float.

Just clawing your way to Disneyland Resort? Call the Disney authorized travel professionals at Academy Travel. They have the feline instincts to put you right into your happy place! Call them at 609-978-0740 and let them know exactly when you want to visit Alice and the Cheshire Cat! Tell them we said hello!

Have you ever had a chance to meet Cheshire Cat? Leave us a comment below!