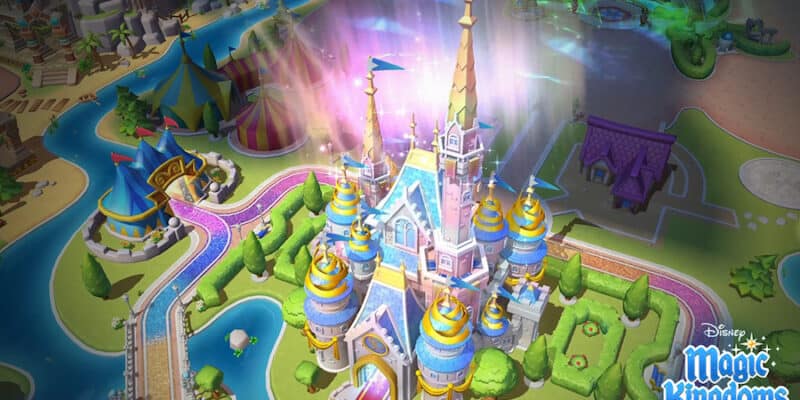 Do you want to find a way that you can be at Magic Kingdom, even when you are not at Walt Disney World Resort? Well, since virtual reality still has a little more work to do to allow us to feel like we are actually walking down Main Street, U.S.A, we have to rely on video games.

Disney Magic Kingdoms is a game that you can download to your phone, and it will transport you to the theme park world. Maleficent casts an evil spell on the Kingdom in the game, ridding it of all its powerful magic. You, as the player, need to help bring it back.

In order to do this, you can “relive the thrill of Disney Parks and create the most fantastical Park of your dreams in Disney Magic Kingdoms! Build charming attractions such as “it’s a small world,” the Monsters, Inc. Laugh Floor and Space Mountain.” Now, the game has gotten even better as players can not only enjoy their Magic Kingdom, but it will be celebrating its 50th anniversary!

Today, players can join the other 80 million Disney fans and watch “the Castle and Main Street transformations inspired by Walt Disney World Resort 50th Anniversary EARidescent logo and banners”. You can fill the Park with Mickey Mouse, Minnie Mouse, and all of your favorite Star Wars and Pixar characters. Plus, you can now also unlock Spaceship Earth, which will have a 50th shimmer to it, much like we can see in real life with the Beacons of Magic added to the structure.

There will also be multiple events in the upcoming days starring Figment and all of your favorite Disney characters, which will help bring the magic of the 50th anniversary celebration to life at the tips of your fingers. Disney Parks Blog notes:

Participate in the upcoming Tapper Event with Figment the dragon taking place Oct. 7 – 10. Tapper Events require you to tap on small items that pop up throughout your Kingdom. Be sure to search your Kingdom for Figment hanging around! The more Figment the dragon you collect, the more prizes you can win, from Concessions Chests to the Mickey Topiary decoration. At the same time from Oct. 7 – 14, players can partake in the “Striking Gold” Collection Event. During this event, players must find gold trophies hidden throughout the Kingdom by collecting them from attractions and character activities.

As someone who was a fan of VMK (Virtual Magic Kingdom), I am happy to see that there is still a way that Guests and fans can engage in a virtual Disney World, as it not only helps with the Disney blues but can get you very excited when it comes to planning your next visit!

What do you think of the new look on Disney Magic Kingdoms?