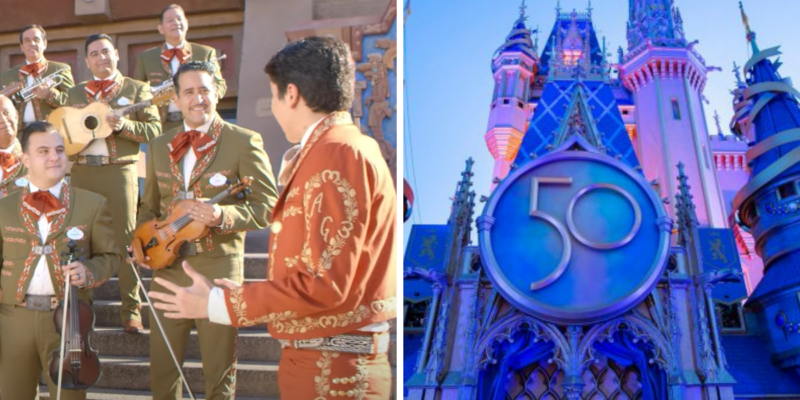 It’s been five years since he voiced Miguel in Disney and Pixar’s Coco, but that doesn’t stop Anthony Gonzalez from still celebrating his famous Disney role!

On a recent visit to Walt Disney World’s EPCOT Park, the 17-year-old voice actor surprised Guests with an incredible performance alongside the Park’s Mariachi Cobre band.

And wow, hasn’t he grown up!

Pixar’s Coco was released back in 2017 when Gonzalez was only 14-years-old. The actor and his family visited Walt Disney World during the Together We Are Magia celebration recognizing Hispanic Latinx Heritage Month, and were able to get a look at the Miguel and Dante sculptures at EPCOT. The golden sculptures are part of the Disney Fab 50 Collection celebrating the 50th anniversary of Walt Disney World.

Gonzales, in a Disney Parks video on Youtube, was thrilled to be there:

“I’ve grown up a bit since then, I’ll never outgrow the excitement of seeing Disney’s fans connect with my character and culture […] It’s not only exciting, it’s ‘un poco loco!'”

Together with the Mariachi Cobre, Gonzalez performed several songs from the 2017 animated film such as “Un Poco Loco,” “Remember Me,” and “The World es Mi Familia.” He told the band:

“I’m such a huge fan. I’m so thrilled to meet you guys. If Miguel has taught me anything, it’s to seize my moment. So I have to ask: any chance I can perform with you guys?”

Here he is performing the tear-jerker “Remember Me” with the famous band:

And a mature Gonzalez hitting the high notes in the song “Un Poco Loco”:

Accompanying Anthony Gonzalez; the voice of Miguel in the movie Coco. Can you believe it’s been almost 4 years since Coco premiered? #mariachi #disney

Accompanying Anthony Gonzalez; the voice of Miguel in the movie Coco. Can you believe it’s been almost 4 years since Coco premiered? #mariachi #disney

In case you are not aware, the new scene will feature the musical number “Un Poco Loco” and, according to Disney Parks Blog, “the film’s fun, upbeat music, and characters combined with the humor of Donald Duck marks the first time Disney and Pixar animators have worked on a creative endeavor where characters from both animation studios will be seen together on screen”.

Have you ever seen the star of your favorite Disney movie put on a surprise performance at Walt Disney World? Let us know in the comments below!