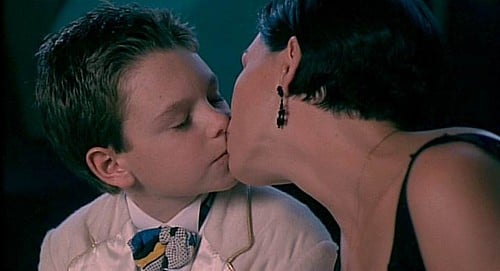 Most of the time, when you sit down to watch a Disney film, it is full of magic, adventure, and nostalgia. Depending on the film, it can bring you can to an earlier time in life when you first saw it or help you find an escape.

That being said, there are some moments in Disney films that are a lot more cringy than others. The film Blank Check (1994), directed by Rupert Wainwright, stars Brian Bonsall, Karen Duffy, Miguel Ferrer, Tone Lōc, Michael Lerner, and James Rebhorn, has a moment that is tough to watch now that we are looking back on it.

The film’s plot, as noted by IMDB, reads:

After committing check fraud, Preston Waters lives out his 12-year-old fantasies by spending a million dollars in 6 days, but he quickly realizes he can’t quite handle the consequences.

Sounds normal, right? For the most part, it is, except for a scene that takes place between 12-year-old Preston Waters and Shay Stanley, a 30-something FBI agent posing as a bank teller. In the film, Waters takes Stanely out for a date, which seems adorable, until the 12-year-old leans in for a kiss and the 30 something-year-old returns the favor.

As a kid watching this scene, I didn’t think much of it, but looking back at it now, it definitely feels weird to watch. Thetypeotakulike on Reddit felt the same way and posted a reaction to the movie scene, which just gets more awkward every time you watch it.

The comments quickly began to flood the post, with others realized that as a kid, they never questioned the scene, but now, it is a tough pill to swallow! Since being uploaded in 2020, the clip has been viewed almost 4 million times.

Got_milkbones1 has a different view of the film as an adult.

“Watching this as a kid I was like..whoa, no way!! Seeing it as an adult I’m like…whoa…no way.”

Vipck83 was shocked no one stopped this from happening:

“Dang, I don’t remember this from when I watched as a kid. It’s amazing how someone didn’t say something during production.”

“As a kid, I remember it being a cool scene. But not anymore.”

“Exactly, I thought it was so cool now, now all I can see is some weird old woman trying to get with a 13 yo.”

Robertbnyc was appalled by the scene:

“Imagine it was some middle age guy saying that to a 13 year old girl in a Disney movie.”

Overall, everyone in the comments was shocked to not only see the scene but also to know that they have seen it in the past and never thought anything of it until now. Of course, the kiss was not overtly sexual in nature; it seems a kiss on the cheek would have been a lot more appropriate.

What do you think of this kissing scene? Let us know in the comments below!

Comments Off on Is This Disney Film’s Underage Kiss Scene Too Cringe-Worthy to Watch?