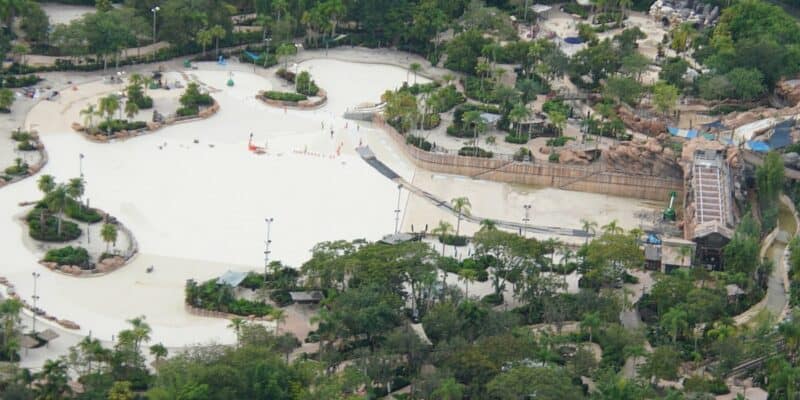 Walt Disney World Resort has undergone many changes as of late, as the theme park continues to reopen since its closure last year due to the ongoing pandemic.

Now, most of the theme park Resort has reopened; however, one major aspect still remains closed after more than one year. Disney World is comprised of four theme parks — Magic Kingdom, EPCOT, Disney’s Animal Kingdom, and Disney’s Hollywood Studios — as well as two water parks, Blizzard Beach and Typhoon Lagoon. When Blizzard Beach reopened, many were looking to see Typhoon post a reopening date as well, but that day has still not come.

Lately, we have seen photos surface of the water park, which has looked quite abandoned as all the water has been drained from the Park. We have seen small refurbishments being done to the Park during its closure, and it seems that there is slight progress, but nothing too large.

Photographer Bioreconstruct (@bioreconstruct) has taken to Twitter to posts a comparison photo of Mount Mayday’s backside over the past few weeks. It seems the blue tarp has been replaced with a green one, but cosmetically, the mountain is still incomplete.

Aerial look at activity behind Mount Mayday in Typhoon Lagoon.

Aerial look at activity behind Mount Mayday in Typhoon Lagoon.

The main wave pool area also continues to remain drained. It seems that there is some ongoing construction on the rock work in front of the pool, but Guests will likely not see this water park reopen until 2022 at the earliest, as the peak summer season is coming to a close. We have seen permits filed for Typhoon Lagoon over the recent months, so it seems that Disney is using this time to ensure that once the water park does reopen, there are no issues left to fix. We wouldn’t want to see Typhoon Lagoon turn into River Country!

Considering there is still active work on the water park, albeit slow, if Disney was looking to leave this Park in the dust, we would likely see nothing at all, or, much more demolition.

When do you think Typhoon Lagoon will reopen? Are you upset it did not open this year?