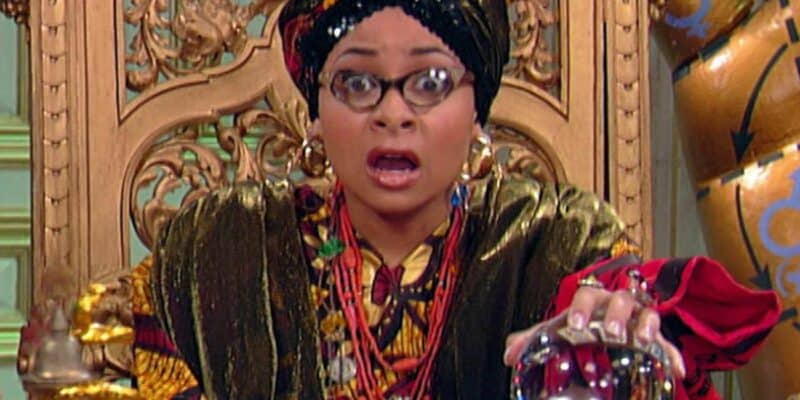 That’s So Raven has been a Disney Channel favorite show for many fans over the years, so much so that it received its own spinoff series Raven’s Home that brought in a new generation of kids into the fandom.

That’s So Raven starred Raven Baxter (Raven-Symoné) and showcased her daily high school life. However, Raven was a little different than the rest of her friends as she had psychic abilities that she would showcase. Each episode typically would have Raven seeing into the future, and she would often do what she could to stop something from happening (or make it happen), which would always backfire, and the outcome would remain the same.

The show ran from 2003-2007, and it seems that there is now a theory that explains how Raven gets her visions, and it is much more spooky than you would think. The theory suggests that there is a demon who can possess Raven and give her these visions to watch her panic in confusion.

The Theory: Even though Raven has psychic abilities, she does not have a lot of control over them. The flashes that Raven gets of future events are usually incomplete and out of context. Like the time she saw a vision of her father Victor (Rondell Sheridan) telling his wife “we need to split up.” Raven assumed her father was talking about a divorce, but it transpired that Victor was talking about splitting up to search for a ring.

Such misunderstandings occurred frequently on the show, which led to theories that Raven’s visions are granted to her by a malevolent deity who enjoys watching the young girl get confused and act out in the wrong manner. If you want to get really meta-textual, the malevolent deity could be the show’s writers, who send Raven on hare-brained schemes based on her visions, simply for the cruel amusement of the audience.

Raven’s visions are never fully explained in terms of why she has them or their origin. Considering it is a supernatural power, this theory is not completely out of left field. Personally, after hearing this theory, I think that the show missed out on a great Halloween episode opportunity where Raven could have been possessed trying to contact someone from “the other side”. If Raven were meant to be possessed, we would have likely seen a few more easter eggs and clues regarding that storyline.

I do think that the writers enjoyed putting Raven in the situations she would fall into, as that was their golden trick to create a successful and interesting plot!

What do you think of this That’s So Raven theory? Let us know in the comments below!