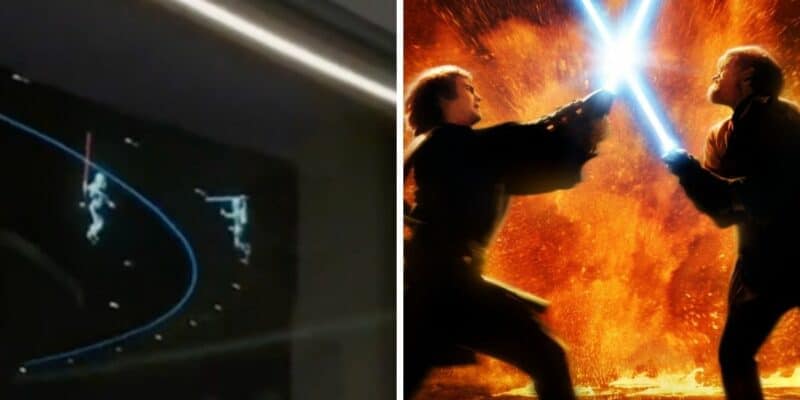 Massive crowds have been flocking to EPCOT’s newest dining spot, Space 220. Opening this week for walk-ins only, the table service restaurant won’t open for reservations until September 27, 2020, and those have been flying, showcasing the heavy demand to dine in outer space.

But while you’re snacking on your Lunar Lemonade or Slow Rotation Short Rib, be sure to look at the giant simulated windows of space. You just might see Star Wars Easter eggs floating past your table!

You might not see any Lucasfilm droids (though we would love it!) but you will see not one, but two Star Wars Easter eggs at Space 220 Restaurant.

Reporter Brooke Geiger McDonald (@BrookeGMcDonald on Twitter) spotted a Star Wars X-wing in the hands of an astronaut while dining at Space 220 on opening day, September 20, 2021. You can hear the murmurs of the large crowd in the dining room while the spaceman floats up and off the simulated space screen.

While the X-wing isn’t a full-size spaceship (the outer space screens here seem to be based in a sort of actual reality), the toy is a good size and fully recognizable to any Disney and Star Wars fan! Brooke’s tweet shows off the video of the astronaut:

But that’s not all! Star Wars fans dining at Space 220 can also be on the lookout for another famous hidden Easter egg as a Star Wars icon — the lightsaber. Featured but not obvious in an early sneak peek TikTok by Disney Parks, two astronauts float around, untethered, wielding differently colored lightsabers.

The Disney Parks TikTok was run on August 13, 2021, and the lightsabers can only be seen in second 20 of the clip, in the distance. Imagineer Zach Riddley showcased the Stellarvator, dining room, and a few windows… can you spot the spacemen?

Theme Park Express did! They saw the battle soaring over the simulated Earth windows, and you have to admit, it gives any Star Wars fan a chuckle. They may appear in any attraction window, so keep your eyes peeled while dining 220 miles above the Earth!

Zoom in to see a lightsaber battle in #Space220! #WaltDisneyWorld #DisneyWorld pic.twitter.com/CpvmQ7uSv3

Have you seen these Star Wars Easter eggs at Space 220 yet? Is there another one you would hope to see at Walt Disney World Resort?

Comments Off on Did You Catch These ‘Star Wars’ Easter Eggs at Space 220?