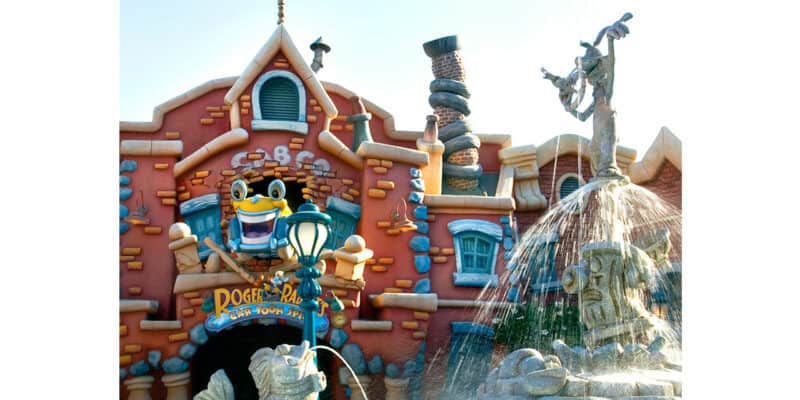 Disney is in the process of updating Roger Rabbit’s Car Toon Spin, a popular attraction in Mickey’s ToonTown in Disneyland Park. But during the ride reimagining, will the attraction have to close for refurbishment? We have the scoop!

Disney has been gradually updating several attractions at the theme parks. We saw Redd the Pirate given a fresh new story in a scene in Pirates of the Caribbean a few years ago, and we know that changes are underway for Splash Mountain, which will be completely reimagined into an attraction based on The Princess and the Frog, the 2009 film from Walt Disney Animation Studios. Now, changes are coming soon to the Roger Rabbit attraction, Roger Rabbit’s Car Toon Spin in Mickey’s ToonTown in Disneyland Park.

Disney recently announced that select scenes within Roger Rabbit’s Car Toon Spin at Disneyland will be updated. Per a Disney spokesperson:

Some scenes in Roger Rabbit’s Car Toon Spin featuring Jessica Rabbit are being updated to be more relevant and reflect a new twist in the character’s story within the attraction.

Disney even released the following graphic to give fans a better sense of this Disneyland Resort ride reimagining:

The graphic is meant to look like a newspaper article and provides some background information about Jessica Rabbit’s lead role. It reads:

Citing the recent return of the Toon Patrol Weasels as the main driver behind the sharp rise in crime statistics throughout Mickey’s ToonTown, Jessica Rabbit has determined it is past time for her to throw her fedora into the ring by starting her own private investigations service. While taking inspiration from longtime friend and legendary toon detective Eddie Valiant, Jessica shows that she certainly means business.

Jessica’s fabled acting career has made her one of the most recognized stars in the Maroon Cartoon family of performers. Now she is using her celebrity to speak out.

“Enough is enough,” Jessica was heard exclaiming last week. “The good Toons of our neighborhoods are afraid to come out at night, and it is getting worse by the day! Those Weasels are up to something big…I am going to find out what it is, and put a stop to it!”

Watch out Weasels, your reign of terror is over!

But will the attraction have to close for refurbishment in order for Disney to make these updates to the attraction? The answer is no. Disneyland representatives confirmed with Inside the Magic that Disney anticipates the attraction staying open as they make updates.

Additionally, Roger Rabbit’s Car Toon Spin is not listed on Disneyland Resort’s refurbishment calendar, which typically lists all Disneyland Park and Disney California Adventure Park attractions and shows that will be closed for refurbishment on any given day. You can view the attraction’s official webpage here.

We’ll share more details on the updates coming to Roger Rabbit’s Car Toon Spin as they are released, but for now, get excited to see the reimagined scenes in this attraction as they make their Disneyland debut!

What do you think of Disney updating select scenes in Roger Rabbit’s Car Toon Spin at Disneyland Resort in California? Are you a fan of this Roger Rabbit ride in ToonTown? Let us know in the comments!