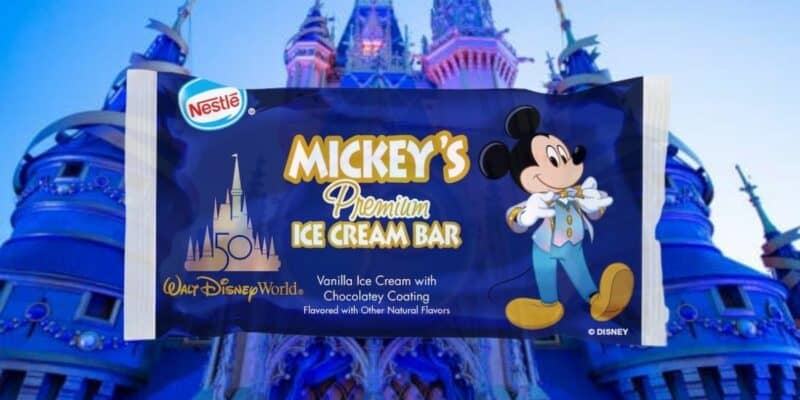 The 50th anniversary celebration of the Walt Disney World Resort kicks off its 18-month long celebration in just a few days! We have already seen the Resort transform into a beautiful sea of EARidescent colors. The official start to the anniversary is October 1, and it brings with it even more surprises for Guests.

Disney has announced plenty of limited-time food and drink options throughout the Resort as part of the celebration. Now, Disney has confirmed that even the classic Disney Parks snack, the Mickey’s Premium Bar, will receive special packaging for the 50th! They really did not miss any details for this spectacular anniversary!

How adorable is that packaging? Thankfully the iconic flavors of the Mickey’s Premium Bar will stay the same. But now when you pick one up you will see Mickey sporting his EARidescent finest, as well as the glittering 50th logo featuring Cinderella Castle.

We have a complete guide to the food, beverages, and treats that you can try during the 50th anniversary of the Walt Disney World Resort. You can click here for more details!

The kick-off to the anniversary celebrations is only a few days away. Remember that big highlights of the 50th anniversary will include the grand opening of Remy’s Ratatouille Adventure in EPCOT, as well as two new fireworks shows. EPCOT will debut the long-awaited Harmonious nighttime spectacular, and Magic Kingdom will debut Disney Enchantment.

There is plenty more news to come about the 50th anniversary of Walt Disney World, stay tuned to Inside the Magic for more details!

Let us know if you like the new Mickey’s Premium Bar packaging in the comments below!

Want to book a Walt Disney World vacation? We can help! Click here for more details!