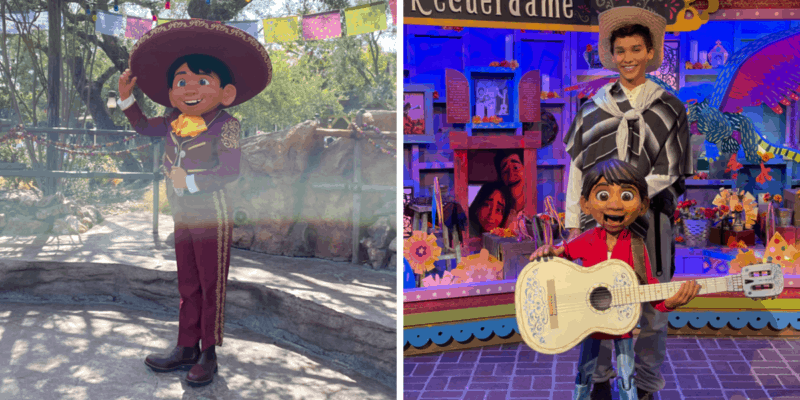 Related: The Story of Coco Debuts at EPCOT Mexico Pavilion

You can see Miguel in a couple of different places at Disneyland Resort. Here’s where to meet Miguel at Disneyland and Disney California Adventure — and how the character will appear differently depending on the location!

At Disneyland, we saw Miguel for the first time on his very own float themed to Coco in the Magic Happens parade, which first debuted at the end of February 2020. At Disney California Adventure, we have seen Miguel (though different) in Plaza de la Familia over the past few years as the Park has celebrated Mexican culture and Dia de los Muertos.

But there is something to keep in mind if you want to see Miguel at Disneyland Resort — he may look different depending on the Park in which he is located!

In Disneyland, Miguel is currently greeting Guests in Frontierland in a small plaza where a Dia de los Muertos commemorative display is located. This is adjacent to the Rancho del Zocalo Restaurante and across the walkway from the Rivers of America, so it’s hard to miss! Here is what Miguel will look like when you see him in Disneyland Park:

Over in Disney California Adventure, you can see Miguel and take a photo of him in Plaza de la Familia over in the Paradise Gardens Park area near Pixar Pier. Miguel is described as “a whimsical, hand-animated dimensional figure” who also appears during performances of A Musical Celebration of Coco, which takes place throughout the day in the Park.

Between shows, you’re invited to take pictures of Miguel—the beloved hero of Coco—and to make new memories with him as he joins his friend Juan beside a beautiful artistic mural entitled “Recuérdame” (“Remember Me”).

Named for the iconic song from the film, the evocative mural depicts the themes touched on by the Storytellers of Plaza de la Familia in A Musical Celebration of Coco, and celebrates Miguel’s beloved family in Santa Cecilia and the Land of the Dead.

As you can see above, you can see Miguel in two different appearances at Disneyland and Disney California Adventure — but both character interactions are magical!

Click here to book a trip to The Happiest Place on Earth so you can see Miguel at Disneyland Resort during this season!

Comments Off on Miguel Has Two DIFFERENT Appearances in the Disney Parks!