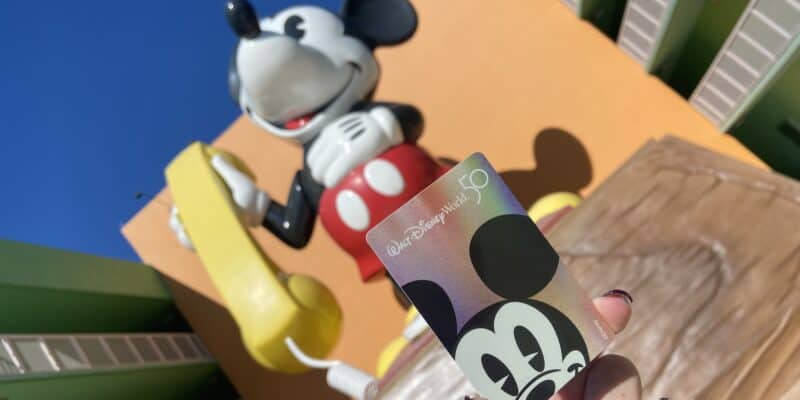 Walt Disney World’s 50th anniversary begins tomorrow, but the Parks and Resort hotels have already released some of the exclusive offerings for this milestone. Not only have we seen the Fab 50 character statues installed around the Parks as well as the new 50th embellishment on Cinderella Castle, but if you are staying at a Walt Disney World Resort hotel, you will receive a new Key to the World design, just for the 50th anniversary!

I checked into Disney’s Pop Century Resort yesterday morning and asked for a Key to the World card, to which they gave me a brand-new design — which has just been released! The Cast Member informed me that these will be handed out to Guests throughout the 50th anniversary and that there are six different designs — each featuring one of the characters of the Sensational Six.

By luck of the draw, I received the one and only, Mickey Mouse on my Key to the World card, which you can see in the images above and below. When the key is in the sunlight, you can really see the background shine and shimmer, which matches perfectly with the EARidescent colors of Disney World’s 50th.

Other designs of the new Key to the World designs include Minnie, Donald, Daisy, Pluto, and Goofy. If you are staying at a Disney World Resort hotel and want one of these new Key to the World card designs, just be sure to go to the check-in desk upon arrival and ask a Cast Member for assistance.

Are you visiting Disney World for the 50th anniversary, which lasts a total of 18 months? Let us know in the comments below.