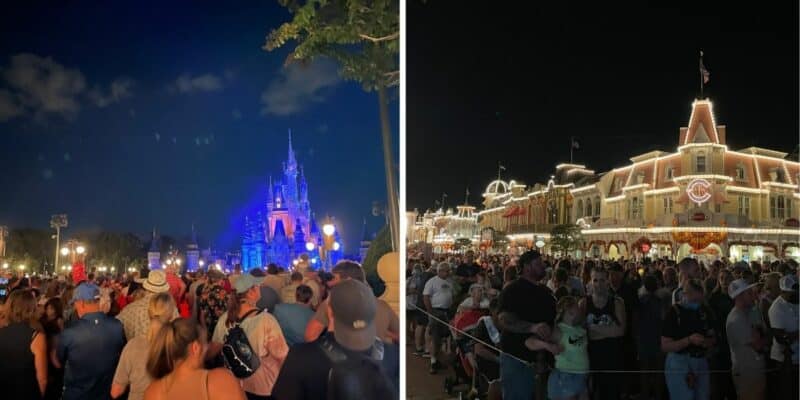 With only one showing left of Happily Ever After, Guests are flocking to Magic Kingdom to see the show for the last time.

Happily Ever After has only been around since 2017, and now that it is ending so soon, especially after experiencing a prolonged closure due to the pandemic, many fans of the show are in shock. Wishes had a much longer duration at Magic Kingdom, so when Disney announced that its predecessor would end on September 29, 2021, many were saddened by the news.

On October 1, Guests will be able to enjoy an all-new firework show, Disney Enchantment which has been created for the 50th anniversary celebration. It has not yet been said if the show will last past the 18-month celebration. Still, it will take the Magic Kingdom firework spectacular to a new level, including illuminations and projections through Main Street, U.S.A. which we have never seen at Walt Disney World in the past.

Tonight was the second last time that Guests were able to see the firework show, and it was genuinely emotional for many. Guests were seen crying at the show’s end, and Cast Members could make it more magical, getting crowds to cheer. One security guard was pumping up the crowd using if we believe in fairies just as Tinker Bell was about to fly, which really made the moment special.

Crowds were lining up hours in advance to secure their spot, so much so that other popular attractions such as Big Thunder Mountain were walk-ons.

The crowds seen were huge, full of Guests looking to see the show one last time before it leaves. Below you can see contracting photos of both the front and back half of the crowds at Magic Kingdom. Both photos showcase a sea of Guests.

Tomorrow night will surely be another crowd-filled event as it will be the final time Happily Ever After will ever play at the Magic Kingdom. Luckily, Disney Parks has a fantastic version of the show on YouTube, so even if we cannot see it in person, we can relive the magic online for years to come.

Are you sad to see Happily Ever After leave?