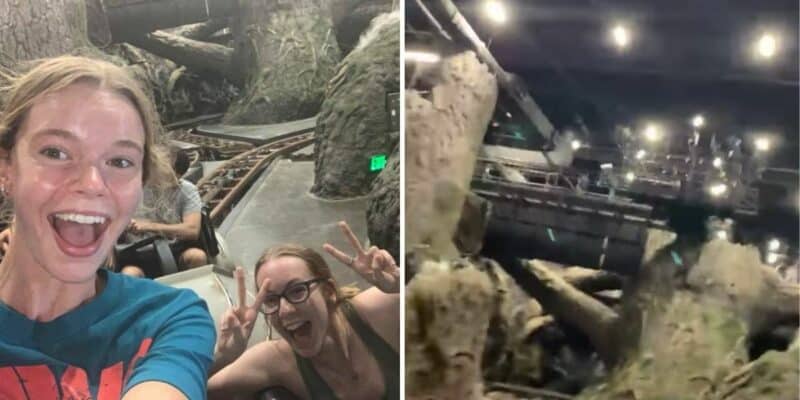 When Guests go to Universal Orlando Resort, they typically do not expect to be stuck, rolling backwards, on a rollercoaster for 30 minutes!

On a recent trip to Universal Orlando Resort, Cassidy V. was having a great time, even though she had a little bit of bad luck choosing what attractions to ride. Cassidy first got stuck on The Amazing Adventures of Spider-Man and afterwards made her way to The Wizarding World of Harry Potter. Once she arrived, she noticed Hagrid’s Magical Creatures Motorbike Adventure was down, so she went to ride Harry Potter and the Forbidden Journey. Unfortunately for Cassidy, that attraction went down while she was on it as well.

Once she was able to get off the ride, she noticed that Hagrid’s Magical Creatures Motorbike Adventure was once again running, and with no wait! Cassidy and her friend immediately went to the queue and walked on the attraction. Everything seemed to be going well until the Forbidden Forrest section.

Cassidy spoke with Inside the Magic and explained what happened:

When we got inside the forbidden forest where the Centaur is, we stopped, and my friend said, “I’d love to see this place with the lights on!” and bam, the lights turned on!! Through the speakers, they say the motorbikes could start moving at any time. We sat there for about 10 minutes until we slowly started moving backwards, which was so scary because when we looked back, the part of the track that dropped wasn’t even back up yet! We all literally thought the cart was going to keep going! It was pretty scary.

But the track came up, and we went all the way back, lights still on, and we dropped! We weren’t sure if that drop was actually going to happen, so it was very scary. I checked my heart rate on my apple watch, and it was at 150! (not normal for me!) we sat in that spot for about 20 more minutes. Over the speakers, they said our lesson cannot be completed today, and a Team Member is on the way.

My friend and I were so excited because we wanted to see the secret parts of the coaster! the Team Members were so sweet and apologetic and gave us water bottles. We walked through basically the entire coaster, seeing the behind the scenes. We were in awe! the Team Members gave us each a ruby pass at the end. Such a cool experience! I think we were the only people excited about it!

We are glad to hear that all was well with the ride and that Cassidy was able to make the best of her situation! When we have reported Guests being evacuated from other Universal attractions it seems that Team Members often try to ensure Guests all leave with water to stay hydrated after waiting, as well as a single Express Pass for another ride to compensate them for their time.

What would you do if you were stuck on a rollercoaster that began to roll backwards?