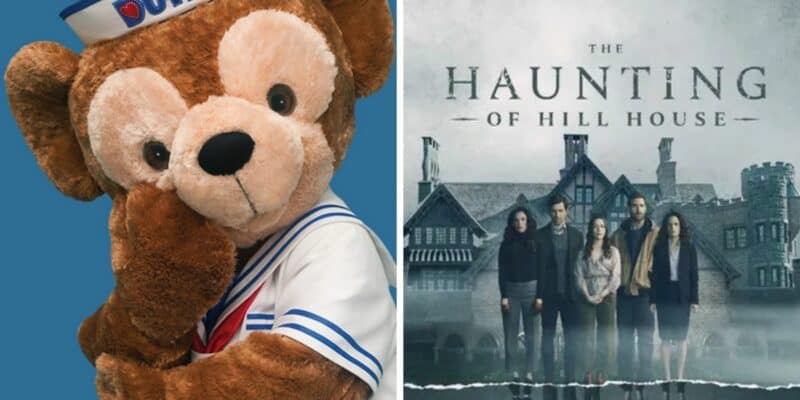 If you haven’t watched Netflix’s The Haunting of Hill House, you have likely heard about it. The 2018 show is a smash hit for streaming giant Netflix — it even inspired a haunted house for Universal’s Halloween Horror Nights.

During a recent rewatching of the series, I noticed something shocking: Duffy the Disney Bear is used as a prop in the show!

Who is Duffy? Duffy the Disney Bear is a character created for Disney Parks by Walt Disney Imagineering. This little bear has his own backstory and a growing cast of new characters being added to his story. Duffy has made character appearances at Disney Parks in the states but is most popular overseas at other Disney Parks such as the Tokyo Disney Resort and the Hong Kong Disneyland Resort.

If you are a Disney fan you have likely seen this adorable teddy bear sold in stores at Disney Parks. Here is how Walt Disney Imagineering describes Duffy:

Duffy is adorable, and the standard Duffy teddy bear has cute “hidden Mickeys” on its paws.

The Haunting of Hill House

It appears that Duffy the Disney Bear was used as a prop in Netflix’s The Haunting of Hill House. While the show came out in 2018, I noticed Duffy in one scene during a recent re-watch of the series. You can see Duffy in the screenshot below:

The most remarkable thing about this makes Duffy a time traveler! The flashback scenes in The Haunting of Hill House are set in 1992 or earlier, and according to the Walt Disney Imagineering website, Duffy did not debut until 2002.

This takes place in Episode 2 of The Haunting of Hill House called, “Open Casket”. IMDb even acknowledges Duffy’s presence in the scene as a “factual error” in the show. This error is a funny little Easter egg in the show for any Disney fan who knows Duffy!

Have you ever noticed Duffy when watching The Haunting of Hill House? Let us know in the comments!