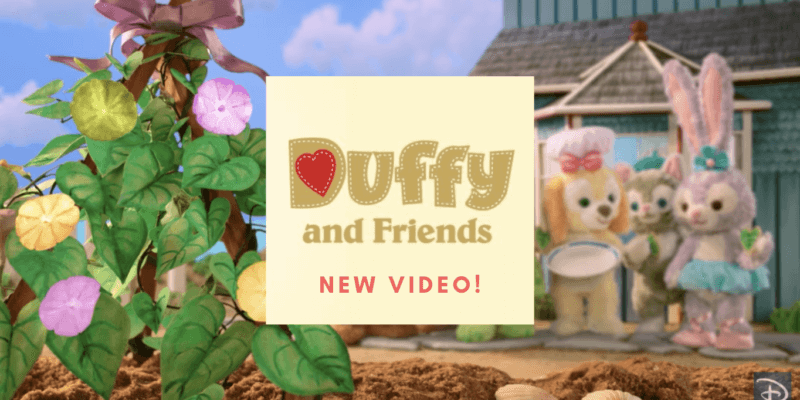 Like all things Disney, Duffy has a detailed backstory. As the tale goes according to the Disney Parks Blog:

“One day in Cape Cod, Mickey Mouse the sailor was leaving on a long sea voyage. Minnie Mouse didn’t want Mickey to be lonely, so she hand-sewed him a cuddly teddy bear to keep him company and gave the bear to Mickey in a duffel bag, which inspired him to name the bear “Duffy.” Together, Duffy and Mickey share adventures – big and small – and make new friends along the way.”

As Duffy has gained popularity among Disney fans worldwide, more cute characters have been added to his group of friends: ShellieMay, Gelatoni, StellaLou, CookieAnn and ‘Olu Mel all appear in this adorable new Duffy & Friends video, just released by Disney!

In this sweet video, Duffy and his friends learn the importance of friendship and teamwork as they grow a garden (with a little help from Olu’ Mel’s Hawaiian ukulele!)

As you watch the video, look out for subtle nods to other Walt Disney animated characters. Duffy and Mickey have nearly identical markings on their feet and faces, for example.

We love the personalities of all of the Duffy and Friends characters and this cute video is an uplifting treat for all ages!

How popular are Duffy & Friends?

If you’ve never visited one of the Walt Disney Company’s Asian theme parks, you might not fully understand the popularity of the Duffy & Friends characters. In Tokyo, Hong Kong, and Shanghai, people flock to the Duffy crew’s meet and greets and fawn over merchandise featuring Duffy, ShellieMay, Gelatoni, CookieAnn, StellaLou and Olu’ Mel.

According to a Travel & Leisure article, Duffy and his pals are even more popular than Mickey and Minnie in the Asian Disney Parks! Tokyo DisneySea’s Cape Cod section is even devoted to the adorable characters.

What do you think about this new Duffy and Friends video? Have you ever met the Disney bear at an international Disney Park?

Comments Off on Adorable Video Featuring Duffy the Bear & Friends!