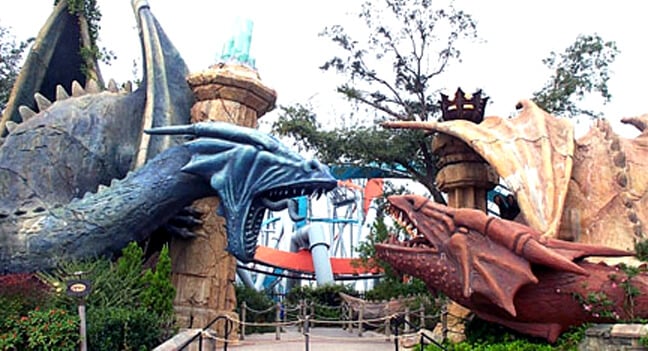 At Universal Orlando Resort, we often see different Park areas being updated to ensure that the Guest experience is always top-notch.

Whether that means touching up a chipped wooden bridge or completely revamping an entire area and adding new attractions, as of late, it seems that something is always going on at Universal Orlando Resort. One of the overall biggest changes that started in Islands of Adventure and then eventually also took over Universal Studios Florida was the insertion of the Wizarding World of Harry Potter.

Although not owned by Universal, the Warner Bros. films created by J.K.  Rowling’s novels have a major following and, when put into a theme park, as we have seen, allows both the movies and books to come to life in extreme detail. Of course, to add two new lands into the parks, this meant that Guests would have to say goodbye to a few attractions.

When Islands of Adventure acquired the Wizarding World of Harry Potter, the coaster Dueling Dragons, a Guest favorite, was rethemed to Harry Potter, but the ride track itself stayed the same. This lasted for a few years until Universal announced that Hagrid’s Magical Creatures Motorbike Adventure would be taking over the attraction. Hagrid’s would be a new coaster, meaning the original existing track for Dueling Dragons, renamed Dragon Challenge, would have to be demolished.

We typically tend to watch coasters be built up at Universal, such as Jurassic World VelociCoaster, but to see one torn down it a very different site. Photographer Bioreconstruct (@bioreconstruct) recently posted an aerial shot from 2017 of what it looked like when the coaster was torn down.

An aerial look back at the demolition of Dueling Dragons (Dragon Challenge). Sept 23, 2017.

An aerial look back at the demolition of Dueling Dragons (Dragon Challenge). Sept 23, 2017. pic.twitter.com/Lja22ktQvG

Funny enough, someone looking at this photo for the first time may not know if the coaster was being built or removed, as it is missing pieces and looks like it is under construction. As we mentioned, the photo is not recent, but it gives us some interesting insight into what happens when new land or attraction replaces an older one. Considering construction walls often block Guests from seeing what is going on, this shot brings us behind the scenes and into the demolition process.

Were you sad to see Dueling Dragons leave Universal? Let us know in the comments below.