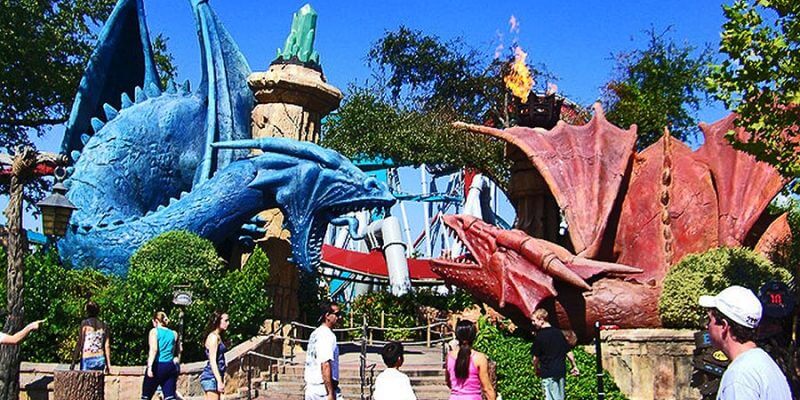 Whether you call it Dueling Dragons or Dragon Challenge, the popular Islands of Adventure roller coaster at Universal Orlando has officially closed to make way for a new “Harry Potter” ride coming in 2019.

The attraction had originally opened with Islands of Adventure back in 1999 and was first named Dueling Dragons. The ride was located in The Lost Continent area with two sides named Fire and Ice. When the attraction first opened, the trains were infamous for starting simultaneously, making for three close encounters between the two rides during operation.

The roller coaster didn’t get the name Dragon Challenge until its refurbishment in 2010, when the Wizarding World of Harry Potter came to the park. Dueling Dragons received a new theme to make sense in this new land. The ride was a pair of intertwined and inverted roller coasters, originally themed as two chasing dragons. One side was a Chinese Fireball (Fire) and the other a Hungarian Horntail (Ice). The attraction’s layout made it so both tracks shared adjacent lift hills, but each individual ride still maintained its own courses. The Chinese Fireball dragon could reach a top speed of 60 mph, while the Hungarian Horntail topped out at 55mph. Both tracks had five inversions and the ride ran for a total of two minutes and twenty-five seconds.

When guests would enter the queue they would be taken past several banners for the Triwizard Tournament. This path would lead to Weasleys’ crashed flying Ford Anglia in a bush next to the queue’s walk path. Guests would then enter the Champion’s Tent, which would take visitors to see the Triwizard Cup glowing at the top. Here, guests would get to enter dark tunnels which lead to both coasters stations. This is where guests were given the ultimate choice, the Chinese Fireball or the Hungarian Horntail. Prior to the Harry Potter re-themeing of the queue, it was the set of a ruined castle where the Fire and Ice dragons lived. In this old queue guests would pass through dungeons with human skeletons, cobwebs and torches. The first day at Islands of Adventure without this ride is today, but operations of the attraction officially ended last night. Unfortunately due to rain, the ride was stopped before closing hours. Guests who had come eagerly to ride the attraction one last time were unable as the call was made that it simply could not run again due to the weather – a bit of an anticlimactic ending to such an experience that has thrilled passengers for so many years. Little is known of Universal’s plans for the new Harry Potter attraction that will take Dueling Dragons’ place in 2019. It has been said the new attraction will be one of the most heavily-themed coaster experiences ever created by Universal Studios. The ride will bring guests deeper into the world of Harry Potter where they’ll encounter favorite characters and creatures. The coaster will also combine a new level of storytelling with action-packed adventure.

In the meantime, Dragon Challenge is no more, now removed from park maps, giving it a permanent place only in theme park history.