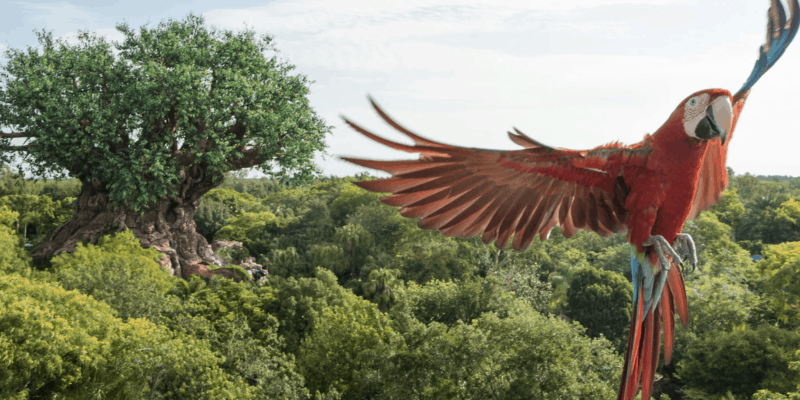 The Feathered Friends in Flight! stage show at Walt Disney World Resort’s Disney’s Animal Kingdom theme park looks a bit different than it did before the COVID-19 pandemic — when the show reopened, the Up! (2009) character performers were gone, but talented Cast Members remain, and they give Guests a delightful presentation on a daily basis.

During a performance on September 24, 2021, hilarity ensued when Cast Members Adam and Scott attempted to bring out one of the free-flying birds during the show.

The bird unexpectedly flew away with Scott’s microphone, leaving Adam to run the show by himself.

After a few brief moments of hilarious uncertainly, Adam ran the show with aplomb while Scott ran to get a spare headset from the show’s sound team.

It is important to remember that the avian creatures who star in Feathered Friends in Flight! are free-flying — this means they have free reign to do whatever they choose and go wherever during the performance.

You can view a full video of the amusing situation below:

More on Feathered Friends in Flight!

The official description of the Feathered Friends in Flight! show reads:

Join the animal behavior specialists for a behind-the-scenes look at the free-flying birds of Disney’s Animal Kingdom. Located at the Caravan Stage, learn how they care for and train their feathered friends.

If you enjoy bird-watching, you’ll also want to check out The Kingdom Takes Flight next time you visit Disney’s Animal Kingdom. The official description reads:

Watch in wonder as the winged stars of the show take off near the Tree of Life. Like a living kaleidoscope, the brilliantly colored birds swoop and soar over Discovery Island.

Keep your peepers peeled for appearances by 6 species of South American macaw: hyacinth, green-winged, blue and gold, scarlet, blue-throated and military. The largest have an incredible wingspan of around 48 inches.

Gather around as our resident bird care experts unlock the secrets of these fascinating creatures—and even answer questions from the audience.

Have you ever seen a stage show go awry at Disney World?