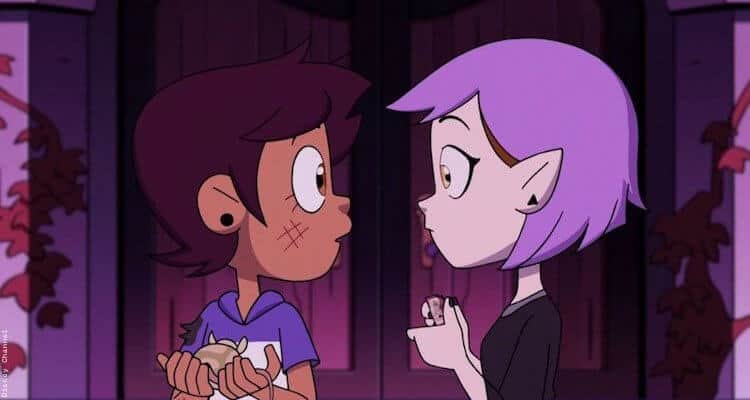 It’s official! A fan-favorite pair of Disney Channel characters are now girlfriends — and the internet can’t get enough.

When it comes to queer representation in Disney film and television content, The Owl House is paving the way.

The latest episode of the Disney Channel animated series The Owl House, created by Dana Terrace, confirmed the relationship of the show’s protagonist, Luz Noceda (voiced by Sarah-Nicole Robles), and series regular Amity Blight (voiced by Mae Whitman). The episode (Season 2, Episode 8, “Knock, Knock, Knockin’ on Hooty’s Door”) premiered on Saturday, July 31, and it wasn’t long before the internet erupted in excitement and praise from the show’s most dedicated fans.

In the episode, Luz and Amity finally share their feelings for each other and officially become a couple. This moment is one that fans of the series have been waiting for since Season 1 (the fandom has referred to the characters by their couple name, “Lumity,” for quite some time). Back in 2020, series creator Dana Terrace all but confirmed on Twitter that the characters were canonically queer when she responded to a Tweet that said “There is no heterosexual explanation for this,” featuring an image of Luz and Amity gazing into each other’s eyes, with “There really isn’t.”

So, it’s clear that this moment has been a long time in the making.

Disney Channel took to the social media platform to post about Luz and Amity as a couple:

Luz + Amity = ??? Is this the most magical moment of #TheOwlHouse yet? Owl #WatchOnDisneyChannel

And if the internet wasn’t already full of praise for Lumity, it is now.

1000% agree! They are so adorable together

1000% agree!
They are so adorable together ? pic.twitter.com/uDXIaqU0yq

SO PRECIOUS SO ADORABLE

SO PRECIOUS SO ADORABLE pic.twitter.com/MlBAIF9AKi

Moon asked for more The Owl House content and an extended Season 3 in their reply, as the series is currently only set for three seasons, with Season 3 being much shorter than the first two.

They are amazing, we know. Now give us more than 3 season ??

Others were re-Tweeted by Terrace, including this one, who pointed out that a romantic moment shared by Luz and Amity in the show was set to the background of the color so the bisexual flag. In case you are not aware, Luz is confirmed to be canonically bisexual, something Terrace made sure of when creating the series and getting the show green lit by Disney.

Terrace re-Tweeted a post by visual development and color designer Mari, who said:

This makes me very happy because I did reference the lesbian and bisexual flag for the effort in this scene, waited a whole year for this

This makes me very happy because I did reference the lesbian and bisexual flag for the efx in this scene, waited a whole year for this ??????? https://t.co/kibowARPk3

Terrace also re-Tweeted this post from the organization GLAAD:

We absolutely loved this week’s episode of #TheOwlHouse! We’re excited to see the series continue to explore Luz and Amity’s relationship and for younger LGBTQ viewers to see this wonderful and affirming message in their favorite show. Check out a special clip!
@DisneyChannel

We absolutely loved this week's episode of #TheOwlHouse! We're excited to see the series continue to explore Luz and Amity's relationship and for younger LGBTQ viewers to see this wonderful and affirming message in their favorite show. Check out a special clip! @DisneyChannel pic.twitter.com/bWes8pHO6f

For more information, you can read the official description of the Disney Channel animated series The Owl House below:

Watch Luz Noceda, Amity Blight, Edna Clawthorne, King, Hooty, and even new characters like Raine Whispers in new episodes of The Owl House on Disney Channel and the Disney Now app every Saturday. You can also stream all of Season 1 and the first episodes of Season 2 on Disney+ now!